Sign UpLogin
You are here: Home / Books / God The Devil And I

God The Devil And I 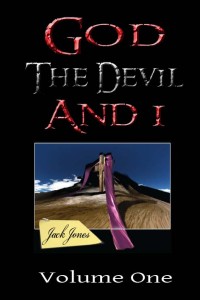 God, The Devil And I is a memoir/biography of Jack Jones.  A Christian book at it’s heart.  God inspired.  An epic journey and extraordinarily incomprehensible life alchemy experiences.  Born an orphaned runt, mute, and into poverty.
Unaided and lacking in support.  Left abandoned.  An underdog in every social situation.  Has been called by God to fight as a warrior, as David did with Goliath.  But appointed by the Devil for death and destruction.  A journey of long suffering, fortitude and perseverance.  Born into a dysfunctional family juxtaposed to a melancholic council housing estate, Sheffield, South Yorkshire, England.  Unidentified by family and teachers.  Bereft, failing, weak, and vulnerable.  A test of survival.  Coping and enduring battles, conflicts, detractors and antagonists.  Missing a sole defender, saviour or white knight.  A book of faith and hope.

Topics addressed include, child development, abuse, neglect, mental health, spirituality and psychology.  The effects of trauma, unmet human needs, roles and responsibilities within the family environment.  The responsibility of the establishment, government, Mental Health services, Church, Christians and society as a whole.  To love the unloved.  A philanthropic endeavour to heal the world, institute peace, forgiveness and tolerance. A true story.

Excerpt from book: Chapter “The Room”.
It’s been five long loathsome years; nearly six.  Marvelling at the fractal clouds; as I lay on my bed, hoping for an enigma, a reason why, meaning and purpose.  Synonymous with the eponymous Robinson Crusoe; as the ocean ebbs and flows and as an old grandfather clock’s pendulum swings to and fro; time eludes me.  Pondering, pontificating, perplexed and paranoid.  Etching and sketching the tally chart of time.  We who tally time by marks in sand or on a wall are proof ourselves that without mark or hope we are but a seamless sentence.

It’s been five long loathsome years; nearly six. Marvelling at the fractal clouds; as I lay on my bed, hoping for an enigma, a reason why, meaning and purpose. Synonymous with the eponymous Robinson Crusoe; as the ocean ebbs and flows and as an old grandfather clock’s pendulum swings to and fro; time eludes me. Pondering, pontificating, perplexed and paranoid. Etching and sketching the tally chart of time. We who tally time by marks in sand or on a wall are proof ourselves that without mark or hope we are but a seamless sentence.

Pardoned, you think of this as some failed guillotine. I, awaiting rescue always meander beach to beach in hope of finding not the bare footprint of the unsought indigenous but any trace of invasion shod. Incubated, marooned and cocooned in this desolate place; the room. These marks were neither in sand nor wall but the deep recesses of consciousness; indelibly inset. When loneliness and isolation exceeds the normal parameters of humanity; one knows instinctively and inherently the cumulative increment of time. The soul has it’s own clock and recording mechanisms.

So God created man and woman in his own image. God looked at what he had made and was very pleased.

Sheffield, reside within the county of South Yorkshire, along with the neighbouring towns of Barnsley, Rotherham, and Doncaster. The region was synonymous with the likes of the North East and South Wales. In that the steel production and mining became the fabric and mainstay of community and society alike. These were working-class regions. Parochially, men were men. And well, women were women. The stereotypical man adorned a broadly austere, stoic, stony disposition. Uncompromising, unashamed, unyielding, abrasive. Opaque at best. On the receiving end you may be condescendingly berated. Hard-working, particularly physical, manual, menial work. Inherent by their virtue of their forefathers and predecessors, behaviour, attitudes, social nuances, roles and habits defined. Language broad and common, even digressing into their own hybrid languages, contrived from slang, poor education, socially deprived communities and mutually bad habits from their peers. This hard-working “bread winner”, assumed the position of head of the home all it’s norms, duties, ceremonies, and routines. Making the decisions, managing the finances, planning social/leisure time, through self-determination. Also, the grocery list and weekly staples dictated. A cultural norm; his evening meal—‘tea’, as they say in Yorkshire—must be waiting on the table, ready to go, on his return from work. Women generally known as ‘house wives or home makers’. Bound to the making of a home, cleaning, cooking, shopping, and mothering any children. Education wasn’t a forethought or a career or even a lowly job. Obvious exceptions …if a young lady had gone to Grammar School or was fortunate enough to attend university, she might become a professional person in status and class. Maybe a doctor, banker, accountant, or solicitor.

The family home situated to the north of the city, a small historic village dating back to the fifteenth century adjacent to what was once one of Europe’s largest council housing estates, the Manor. A new private housing estate was built in 1968 juxtaposed to these two locations. In that plot, Jack’s parents bought their first home. They would bear three children. Jack, Josh, and Paul. Paul was born first in ’68, Josh three years later, and Jack thirty-minutes thereafter. Twins. His parents were descendant’s of broken families, absent fathers and mothers whom were incapable of being parents. The Manor a forlorn dystopian sprawling metropolis of homogeneous grey houses, tersely worded signs, litter strewn, impoverished, and unkempt. A spirit of melancholy would make it’s home there.

Jack was born a very special boy. Prolific, precocious, and cognisant. Who would surpass expectation and excel. Become something he wasn’t. A metamorphosis by decree of the Most High. Possessing an inscrutable disposition. Achieve anything he turned his hand to. The world really was his oyster. Complemented by his bleached Scandinavian blonde hair and gorgeous blue eyes, meek, mild, inherently passive with a pacifist persona. Unwittingly gifted, gentle, humble soul. Ignorant of his traits. A naturally forgiving, merciful nature, missing exhortation, or chastisement. Despite the aforementioned, excruciatingly shy, reserved, and hidden. On the rare occasion daring to reveal a portion, raw beauty would emerge. Cheeky, enamoured with humour. Notwithstanding sweet and innocent. However, an unlawful impediment would permeate his being, unbeknown. Lying dormant, but effective. The enemy within. Jack had an irrevocable supernatural calling on his life. God had called him from the beginning. A very strong calling. Called by name … Jack, you are called. An antithesis of self, a dichotomous soul, and warring factions would resonate. The powers of heaven and hell were at their command posts. Angels and demons.

For we wrestle not against flesh and blood, but against principalities, against powers, against the rulers of the darkness of this world, against spiritual wickedness in high places. (Ephesians 6:12 KJV)

A defining moment known as “The Great Endurance”.

For I am persuaded, that neither death, nor life, nor angels, nor principalities, nor powers, nor things present, nor things to come, Nor height, nor depth, nor any other creature, shall be able to separate us from the love of God, which is in Christ Jesus our Lord. (Romans 8:38-39 KJV)

But also a curse. To condemn, disparage, distort and destroy. A thief in the night. Incognito, with legions of ranks, warriors, foot soldiers, generals and infantry men.

The thief comes only to steal, kill, and destroy; I have come that they may have life, and in abundance. (John 10:10 NIV)