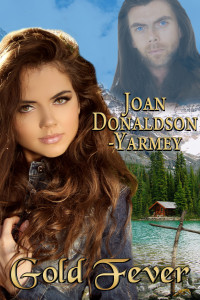 Boni Baldwin is taken out of the city and thrust into an environment she dislikes– camping. Her mother, Elsie Wiggins, is on a quest to find information on her father who disappeared fifty-five years ago in the mountains of southern British Columbia and Boni is the only one of her children who is able, but reluctant, to accompany her.

The first person they meet is Rick, a mountain man who has a claim on the Salmo River and is prospecting with his grandfather for gold. He offers to show Boni around the area hoping to convince her that being in the bush is not a terrible thing. They also meet Jerry, who is the one Elsie contacted about camping on his gold claim. Jerry offers to show Elsie how to pan for gold during her stay. Boni and Elsie are threatened by other prospectors along the river and told to leave. When they don’t, their campsite is trashed, twice. This scares Boni but only makes Elsie mad. No Rambo wannabees are going to frighten her away. They do discover some new clues about Elsie’s father after all these years, but all that comes to an end when the man they are scheduled to interview is murdered before they get to his house. As much as they hate to admit it, both Rick and Jerry are on their list of suspects for the trashing of their campsite and for the murder.

It was late afternoon on a cold autumn day. The wind blew through the trees, snatching the few dead leaves left on the branches and swirling them through the air. Heavy dark clouds hung low over the mountains, threatening snow. Two men grunted as they carried a blanket‑wrapped body through the green cedars and pines and the already bare poplar trees. They were hunched down in their coats, their hats pulled tight on their heads. They turned their faces away from the wind.

“This is a good spot,” the man in the lead said. He was tall and gaunt, and with a three days growth of whiskers appeared older than his twenty-four years.

The second man was younger than the first, hardly more than a boy. He didn’t answer.

They stopped and roughly dropped their bundle on the ground in a small meadow. Over the noise of the wind they could hear the sound of a waterfall made by a small creek tumbling over the edge of a nearby cliff.

“Let’s get this done,” the first man said gruffly.

The men unhooked their shovels which had been tied to their backs. During the summer the small meadow was knee deep in ferns, flowers, and small bush as were all the meadows in the region. The growth suggested a plentiful, rich, nutritious soil. But instead, of easy digging, their shovels clanged continuously against rock as they tried to remove the sparse layer of dirt. It was the occasional bountiful rains of the British Columbia summer that kept the vegetation alive.

They worked silently. The young man occasionally snuck a quick glance at the covered body waiting to be buried. Many times they had to stop and lift out a rock before they could continue. Digging in the mountain side for gold was never easy, digging a grave was even harder.

Despite the cold day and the wind, the older man was soon sweating. He stopped and removed his coat, throwing it beside the body.

“We shouldn’t be doing this,” the younger man said. “If it was an accident like you said, we should tell the police.”

“They won’t believe us that he fell and hit his head on a rock. They’ll think we murdered him for the gold and send us both to prison. Then who would look after your mother?”

“And we would have to give them his share of the gold. We have more of a right than they do. We did most of the work.”

“B… but we’d agreed, the three of us, to divide the gold equally.”

“Shut up and keep digging.”

They resumed chipping away at the rock and dirt. Eventually the older man stopped. He looked at the depth of the hole and then over at the body. “That’s good enough. We’ve got enough dirt to cover him.” He dropped his shovel on the ground beside the makeshift grave and stepped out.

The younger man followed suit. They knelt down beside the body. The older man lifted the corner of the blanket and took one last look at the face of the dead person.

“Nice guy but too trusting.” He let the blanket fall and they rolled the body into the grave. They each grabbed their shovels and began filling in the hole.

“Just fill it in ’til its level with the ground.”

“What about the rest of the dirt?” asked the younger man.

“We’ll just spread it around.”

“Are we putting rocks on top to keep the animals away?”

“No, throw them into the bush.”

“What about a marker?”

“Don’t be stupid. We don’t need anyone finding it.”

What little dirt was left they scattered in the weeds. The younger man tossed the rocks near the edge of the bush. The older man pulled a few dead ferns and flowers and stuck them in the darker, fresh dirt trying to make it blend in with the rest of the area.

“Do you want to say a few words?” asked the younger man. They had finished and were looking down at the almost unnoticeable grave. The wind had increased and the older man had put his coat back on. Night was rapidly falling.

“There’s nothing to say.”

The younger man looked down at the grave. “I’m sorry,” he said softly. “This isn’t right.”

The older man’s anger was immediate. He jumped at the younger man grabbing the front of his coat and pulling his face close.

“Are you starting to go soft on me? Do I have to shut you up?”

The younger’s eyes widened. “No, no,” he said, fear in his voice.

“Don’t you ever tell anybody,” the older man said through clenched teeth. He pulled the younger man closer until their noses almost touched. “Do you understand? Nobody. Ever.”

The younger man nodded as best he could. “Nobody,” he whispered.

The younger man hesitated and the older man shook him until his head flopped back and forth.

The older man stared into his eyes then, apparently satisfied, let him go with a shove. He gave one last glance at the rectangle then picked up his shovel and walked away.

The younger man looked down at the grave then quickly followed the other man.

Back at their large canvas tent, which had been pitched on a high bank overlooking the Salmo River, the older man began packing his few clothes into his duffel bag.

“What are you doing?” the younger one asked.

The older man shrugged. “I don’t care. Go back to Fruitvale and your Ma or go to work in the smelter in Trail.”

“What about my share of the gold?” The younger man held his breath.

The younger man tried not to cringe as the older man stared at him then reached in his pocket. He tossed a small bag at him.

The younger man looked at the bag. He knew it didn’t hold half of what they had earned this summer but he didn’t dare say anything.

“I’m leaving this tent,” the older man said. “Stay here if you want or find something else to do because you aren’t coming with me.” The man threw his duffel bag on his bed then took a step towards the younger man. He glared down at him. “If you ever break your promise I’ll come back and kill you and your Ma and any other family you have. You understand? Even if it’s ten, twenty years from now.”

The older man dropped down beside his duffel bag on the bed and turned his back to the younger one.

After a few minutes, the younger man laid down on his bunk. He clasped his hands behind his head and stared at the sloping ceiling until it was too dark to see.

Later that night when the storm had ended and the moon was high in the sky, a shadow crept silently out of the tent and worked his way through the trees to the small clearing. On the way he broke two branches off a tree and bound them together with some string. The clouds had dispersed and the moon was full and bright. Although it had only been a few hours since they had dug the grave, he already had a hard time locating it. When he at last found the right spot, he plunged the cross into the ground as far as he could, then took a rock and pounded it in further. He gathered the rocks they had thrown aside and piled them on the grave. Then he stood for a few minutes in the moonlight and gazed down at the grave.

Finally, with a sigh, he silently left the small clearing. Instead of heading back to the tent, he started walking down the road. He wanted to get as far away from his mother’s step-brother as possible and never see him again.