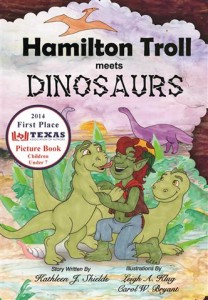 Dinosaurs lived millions of years ago and are now extinct yet they left behind clues that tell their story.  Hamilton Troll comes across one of those clues, a fossil, that leads him and the Beaver Brothers up the river to a dinosaur museum where they learn so much about these prehistoric animals, including how big some of them were.

However it is when Hamilton Troll walks up to a hatching nest of eggs and meets these dinosaurs first hand that he discovers how great and magnificent these creatures once were.