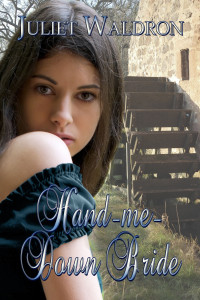 Sophie traveled to America to become the second wife of wealthy miller, one who would be satisfied with nothing less than a “pure German bride.” She awakens the morning after her wedding still a virgin, with a corpse beside her. The oldest son, relieved to be so quickly rid of the interloper, tries to send her away, but the youngest, manager of his Papa’s mill, needs a housekeeper. Karl is a scarred veteran of the Civil War, a man who has hidden the pain of his family’s secret violence. She, afraid and alone in a new country, sees him as a proud, privileged, boorish American and she knows, to her sorrow, how the experience of war can warp a man.

Less than a year in green and growing German’s Mill, Pennsylvania and the whole world will be brighter for them both.

Sophie studied her toes.  She sat on the double bed in which she’d spent the night, knees drawn up beneath her white lawn nightgown. Lifting her dark head, she gazed through a nearby window at a May morning that shone upon a blooming–but sternly regimented–rose garden.  In spite of the warm breeze, she shivered.

Then, hoping it wasn’t true, for the hundredth time, she looked at the other narrow bed, the one next to hers.  Upon it lay her new husband, the rich grandfatherly man who’d paid her way from Germany, a man she’d married only yesterday.

Theodore Wildbach was quite dead.  Proper, in death as in life, he was flat on his back, hands folded on his chest. He looked like the stone knights lying in the cathedral in her home town.  That was how Theodore habitually slept, and how he’d died. Pale lips gaped inside a ring of neatly trimmed salt-and-pepper beard.

She’d discovered him upon awakening. She’d come close, staring, unable to believe her eyes. It was a terrible surprise, nowhere among the thousand twists of fate she’d imagined as she’d journeyed across sea and land to German Mills, Pennsylvania…