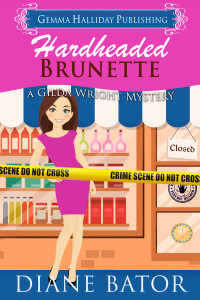 Gilda Wright’s life seems to finally be on track. Her love life is looking up with her hot boss, Mick, and she’s planning and promoting a grand opening extravaganza for his new martial arts school. But things go awry when their special guest referee for the opening’s exhibition match is found dead on the beach. To make matters worse, the school’s sexy new weapons instructor, Kane Garrick, stands accused of his murder. In spite of her promise to Mick and nearly everyone else in town to not get involved, Gilda—a.k.a. the Brunette Sherlock—wades into danger one more time. The only question is, can Gilda catch a killer before the killer catches up to her?