Sign UpLogin
You are here: Home / Books / Hustle Henry and the Cue-Ball Kid

Hustle Henry and the Cue-Ball Kid 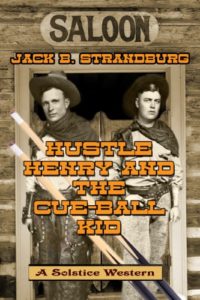 Hustle Henry and the Cue-Ball Kid Jack B. Strandburg Clarence Flannery was luckier than most men his age to discover his life’s ambition, particularly in the unpredictable years just following the Civil War. Born with an unmatched skill to play pool, he left his home in Kansas when he turned twenty-six and traveled throughout the Southwestern United States to make his mark as a legendary pool hustler, with every intention of amassing a fortune in the process. Clarence needed help for both support and protection, and recruited James Skinner as his partner, along with nine other highly-skilled pool players to assist him in his quest. Wanting to be included in the same sentence as Attila the Hun and Alexander the Great, Clarence changed his name to Hustle Henry, Skinner became the Cue-Ball Kid, and the eleven men would go down in history as The Hole-in-the-Table-Bunch, known far and wide for hustling wannabe pool sharks out of their life savings. All goes to plan and life has a rosy and profitable outlook, but Henry and his men want more than what pool halls and saloons offer, so they decide to challenge the more affluent clientele on a riverboat. Initially, the venture proves profitable, but the millionaire tycoon and owner of the fleet of riverboats, takes exception, and intends to bring down the Bunch and thrust Henry and The Kid into a life of destitution. Taking along the Kid’s girlfriend, Penelope Henderson, the Kid and Henry flee to South America – where there will be a final showdown…