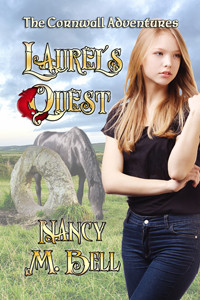 A trip to England sounds like a grand adventure, but Laurel Rowan can’t escape from her true reality. Her mother is terminally ill, and her father needs her to go so he can spend his time at the hospital. On a train to Penzance, Laurel meets a new friend, Coll. On the property of her host, she stumbles upon a magical spring. There she meets the White Lady, who offers her a chance at gaining her heart’s true desire, if only she can solve a riddle.

Pursuing her quest amidst the magic of the Cornish countryside, she is aided by Coll and her new friends Gort and Aisling. They are also helped by creatures of legend and myth, Vear Du, the Selkie, Gwin Scawen, the Cornish Piskie, Belerion the fire salamander, Morgawr the flying sea serpent who does Vear Du a favour, and Cormoran, the last giant of Cornwall. The friends must battle the odds in the form of bullies and confusing clues. Will they emerge victorious? Will Laurel have the courage to solve the riddle and fulfill her quest?