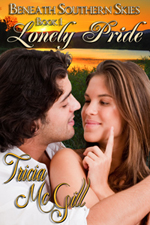 Sam fell in love with Mac at first sight when she was still a child and he a teenage boy, almost but not quite a man. A special bond formed between them, fuelled by their mutual love of animals—especially horses. As each matured, that bond threatened to move beyond the limits of friendship. By the time Sam reached her 17th birthday she was desperately in love with him, her shining hero. But one awful night Mac betrayed that love and Sam was unable to find it in her heart to forgive him. By the time the truth was revealed they had both moved on with their lives, and Sam’s pride prevented her from forgiving Mac; threatened to ensure her a lonely future.

“I was supposed to take the book on vacation with me, but I made the mistake of starting it and couldn’t stop until I finished–but then Tricia McGill is one of my favorite authors. She grabbed me from the beginning…emotional sparks were so real I felt the tension. I encountered an amazing range of emotions reading this book…

Tricia McGill has an astounding way with words. Once you read her books, you’ll become a avid fan.” Brett Scott TRS