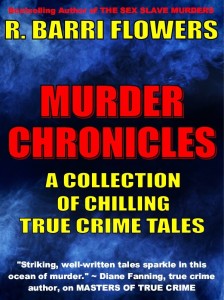 The collection includes ten compelling stories of murder, madness, and mayhem that span more than a century of American history and homicidal criminality that will keep you reading from beginning to end.

1. Murder at the Pencil Factory: The Killing of Mary Phagan – 100 Years Later, the brutal murder of a young girl turn locals into vigilantes out for justice.

2. The “Gold Special” Train Robbery: Deadly Crimes of the D’Autremont Brothers, a daring train robbery by a trio of brother bandits goes wrong and turns deadly.

3. Murder of the Banker’s Daughter: The Killing of Marion Parker, a brazen abduction of a schoolgirl turns tragic as authorities hunt for the killer.

4. Mass Murder in the Sky: The Bombing of Flight 629, a mother’s Christmas gift turns deadly, exploding in an airliner above Denver, with a domestic terrorist on loose.

5. The Amityville Massacre: The DeFeo Family’s Nightmare, family is shot to death by a killer too close to home. Inspiration for The Amityville Horror movies.

7. Murderous Tandem: James Gregory Marlow and Cynthia Coffman, two killers pick off victims one by one till brought to justice.

8. Murder in Mission Hill: The Disturbing Tale of Carol Stuart & Charles Stuart, a wife’s murder draws national attention with an unlikely killer on the loose.

9. Murder in Bellevue: The Killing of Alan and Diane Johnson, in a case of parricide, a teenage girl’s obsession turns deadly.

“R. Barri Flowers always relates an engrossing story.” — Robert Scott, author of The Last Time We Saw Her on The Sex Slave Murders

“A model of exposition not to be missed by anyone interested in the annals of American criminal behavior.” — Jim Ingraham, Ph.D., professor emeritus of American Studies at Bryant University on The Pickaxe Killers

“Exhaustively researched, each storyteller brings their own unique prose to these pages, creating what will soon become a true crime classic.” — Kevin M. Sullivan, author of The Bundy Murders on Masters of True Crime

“This book should be a mandatory purchase and read for any true-crime buff.” — Steven A. Egger, Ph.D., associate professor on Masters of True Crime

“An indispensable sourcebook for anyone interested in American homicide, from law-enforcement professionals to armchair criminologists.” — Harold Schechter, author of The Serial Killer Files on The Dynamics of Murder

Murder at the Pencil Factory Excerpt

Murder at the Pencil Factory

On Saturday April 26, 1913, Mary Phagan, age thirteen, became the victim of a violent death at the National Pencil Factory in Atlanta, Georgia where she was employed. Her job at the factory was putting erasers into the metal casing atop pencils. The appalling crime left residents of the city outraged and wanting justice for the victim. Fingered for the crime and convicted was factory superintendent Leo Frank, a Jewish-American, who would be hanged by a lynch mob in spite of controversy surrounding Frank’s guilt. The century old case was every bit as captivating and publicized as any high profile crime today—complete with a shaky investigation, anti-Semitism, racism, stereotyping, rush to judgment, injustice, and murder—with the effects and outcome of the case still being felt to this day.1

Mary Phagan was born in Marietta, Georgia on June 1, 1899 to tenant farmers John and Frances Phagan. Following her father’s death shortly thereafter from the measles, the family relocated to East Point, Georgia where Frances ran a boarding house while her children went to work in the mills.

Mary dropped out of school when she was ten years old and worked part-time for a textile mill. By 1911, she had gone to work for a paper manufacturing plant. The owner of the plant, Sigmund Montag, was the National Pencil Company treasurer. The following year, Frances Phagan married John William Coleman.

During the spring of 1912, Mary went to work for the National Pencil Company in Atlanta, where she operated a knurling machine that fitted rubber erasers into the metal casing atop pencils, earning $4.05 a week for a fifty-five hour work week. The factory superintendent was a twenty-nine-year-old Jewish-American named Leo Frank.

On the cool, crisp late Saturday morning of April 26, 1913, thirteen-year-old Mary Phagan—who had been temporarily laid off earlier in the week because the factory was short on brass sheet metal—took the trolley to Atlanta from East Point in order to collect wages she was due for a twelve hour work week. Afterward, she had plans to get together with friends to celebrate Confederate Memorial Day—a holiday in some Southern states since 1866 that honored soldiers who fought for the Confederacy during the Civil War.

It was around noon when Mary arrived at the Pencil Factory, a four-story stone building in downtown Atlanta that encompassed the entire block of 37 to 41 South Forsythe Street. She came inside the main entrance on the first floor and made her way toward the stairway en route to the second floor, where she had performed her duties in the “tipping department” section of the metal room prior to being laid off. It was also the floor where factory superintendent Leo Frank’s office was. Not far away from the stairs on the first floor was a hole, often covered by a hatch, which led to the basement via a ladder.

Mary Phagan went to Leo Frank’s office, where he handed her a paycheck for $1.20. Frank would later acknowledge paying her and say that she left his office afterward.

This would be the last time Mary Phagan was seen alive by anyone who could attest to that.

Leo Frank was born in Cuero, Texas on April 17, 1884 to parents Rudolph and Rae Frank. A few months later, the family relocated to Brooklyn, New York, where Frank would later attend Pratt Institute for his high school education. He graduated in 1902 and enrolled in Cornell University, majoring in mechanical engineering and participating in sports, the debate team, and photography before receiving his degree in June 1906.

He was hired to work as a draftsman for a six-month stint by the B. T. Sturtevant Company in Hyde Park, Massachusetts before going back to New York to work for the National Meter Company as a testing engineer until October 1907.

In December 1907, Frank did a nine-month apprenticeship in Germany’s Eberhard Faber pencil factory, learning the skills for pencil manufacturing. The following year, on August 6th, he moved to Atlanta, Georgia where he had a job waiting for him as the supervisor of the National Pencil Factory that his uncle, Moses Frank, had a stake in.

Shortly upon his arrival in Atlanta, Leo Frank met Lucille Selig, a member of a prominent Jewish family whose ancestors had founded Atlanta’s first synagogue. In November 1910, the two married, living at the home of Lucille’s parents on East Georgia Avenue.

By 1913, Atlanta’s Jewish community was the largest in the South. The year before, Frank had been elected as president of the city’s chapter of the Jewish fraternal organization B’nai B’rith. The Franks had settled comfortably into a “cultured and philanthropic milieu whose leisure pursuits included opera and bridge.”2

Leo Frank, who was five-foot-six, of slender build, and on the frail side, wore thick glasses. He had successfully served as supervisor of the National Pencil Factory for five years with seemingly no problems to speak of until the day Mary Phagan became the victim of foul play.