Sign UpLogin
You are here: Home / Books / Murder in the Mountains

Murder in the Mountains 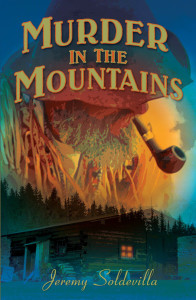 Murder in the Mountains

Katie Cathcart’s gruesome murder in the remote Crazy Mountains of Montana points at an eccentric modern day mountain man, Bridger Jackson, living in a hidden cave away from society. Ignoring the sheriff’s warnings and bent on revenge for his sister-in-law’s death, JJ Volker grabs his gun and goes tracking Jackson’s trail in hopes of not only avenging Kaitie’s death but of reestablishing the love of his wife. His expert tracking techniques make him the only man likely to be able to locate the mountain man from whom he learned those techniques, Bridger Jackson. But is he on the right trail to find either?

JENNY FOLLOWED THE COW’S TRACKS in the muddy spring snow until it gave way to the greening pasture.

“Whoa.” Her horse stopped its plodding pace and exhaled a cloud of vapor in the brisk mid-morning air.

She’d come as far up the mountain as the old ranger station. This was ridiculous.

“Damn cow,” she swore under her breath. The horse’s right ear flicked back to catch what she was saying.

Saddle leather creaked as she stood in the stirrups, scanning the landscape for any sign of the runaway bovine.

A chilly mountain breeze whispered through the timber, ruffling the horse’s mane and causing Jenny to fasten the top button of  her Carhartt  jacket.

The horse’s ears twitched forward and he lifted his head, his nostrils exploring the air.

At that same moment, Jenny caught a movement out of the corner of her eye. Is that the damn cow finally? She put her hand above her eyes and squinted to get a better look.

Far off, across the pasture, a dark form crouched behind a large pine tree. That ain’t no cow, she thought. A slight shiver ran through her body, but no breeze was blowing.

Thoughts tumbled through her head. Who the heck is up here this time of year? What’s he hiding for? Should I go check him out?

She heard her father’s voice in her head. Jenny, mind your own damn business. Stick to your knittin’.  If you got a job to do, get ‘er done. Your job is to find that heifer and bring her home. Now git.

Jenny reined her horse to the right and moved on, throwing a brief look over her shoulder at the barely hidden man at the tree. Her horse’s left ear trained back toward the man, but he dutifully continued in the other direction.

After a few more paces, Jenny turned for a last look up the hillside. She halted the horse and saw the man break from the timber, heading toward the cabin. Even at that distance she realized he was dressed in buckskin and had a large hump of something on his back.  Another chill splintered down her spine. The heavy beard and long hair. She had a pretty good idea who that was.

She gently kicked her horse into a trot and headed farther down the pasture.

They had only gone a few more yards when she suddenly stopped short and gasped.

Surrounded by a huge pool of blood lay her black Angus cow. Or, more accurately, what was left of it. An arrow protruded from its chest. Its gut pile lay still steaming next to the body.  Half of the cow had been trimmed from the bone. A pair of black and white magpies, perched on the animal’s exposed rib cage, tore at the meat and eyed her approach, loath to leave their feast. It wouldn’t be long before bears or mountain lions showed up to gorge themselves on the half-finished corpse.

“You bastard!” she screamed  back towards the ranger station, her voice echoing up the mountain.

She wheeled her horse around and jammed her heels into its sides, her anger and fear making her kick a little harder than she meant to. The horse, seeming to sense her urgency, picked up his pace and the two charged back down the mountain in the direction they had come from.

TWENTY-SEVEN-YEAR-OLD JJ VOLKER peered up from his half-empty cup of cold coffee as did the other cowboys at the counter in the Wilsall Café when the cowbell hanging from the door announced the entrance of Park County Sheriff Colton Stollar. The cook, working in the kitchen, wiped a string of hair from her brow and glanced up from the spattering grease in the Fryolater to see who had come in.

A hefty rancher shovelled the last of the cheeseburger into his mouth, dripping a glob of mayonnaise and ketchup onto his coveralls. A scrap of hamburger bun dropped in his lap as he greeted the new arrival, spewing chunks of his lunch into the air, “Afternoon, Sheriff!”

JJ watched Sheriff Stollar stride across the worn wooden floor, past the display of postcards and the humming Wilcoxson’s Ice Cream freezer chest. The spotless uniform fit crisply on his six-foot-two frame.  His silver badge gleamed like a brand new car’s chrome. Craggy good looks, confident bearing and strength emanated from him in electrical waves. With a moustache drooping down the sides of his face, he looked approachable, but underneath the smile lay the aura of a self-assertive man not to be trifled with.

At the lunch counter, the waitress looked up from the coffee cup she was refilling and smiled broadly at the sheriff. She curled a wisp of hair behind her ear and smoothed her apron.

Removing his sunglasses and sliding them into his pocket, Stollar eased himself onto a stool, gave Laurie a wink and smiled back.

“Colton.” She nodded and threw him a generous wink.

“You’re looking gorgeous today. How are those steak fingers?”

“As good as they were when you had ‘em yesterday and the day before that, Colton, and just as fresh as you are.”

“Well, then I’ll have them and a cup of that stuff you call coffee, please.”

“You bet.” She winked again and headed back to the kitchen, putting a little attitude in her hips.

The sheriff pushed back his Stetson and acknowledged the other lunch customers with a nod. “Hey, Tom. Charles.”

“Sheriff.” The two cowboys nodded back in unison.

At the end of the counter JJ glanced up from the coffee cup he’d gone back to staring into and narrowed his eyes. “About as good as can be expected with a dead sister, I guess.”

An audible silence fell over the room and each diner stared down at his own plate of food.

Colton paused for a beat, then said, “Well, tell her I was asking about her.”

“Sure, Colton.” JJ glanced around the room and mumbled, “Sorry,” then went back to staring into his coffee and stirring it idly with his thumb. A brooding helpless anger simmered in him.

Silence hung like a dark cloud until the door of the café burst open and slammed against the wall. Jenny Thompson rushed in and headed for Stollar. Her no-nonsense entrance was made all the more clamorous by the cadence of long fringe edgings that slapped against her worn leather chinks as she clomped her muddy boots across the plank floor.

Jenny’s freckled face was flushed with exertion and damp with specks of mud splattered across her tanned cheeks. “Sheriff!” she said breathlessly. “I seen him! I was chasing one of my cows up off  Horseshoe Creek Road near the pass and I seen him running toward the old ranger station. I know it was him, so I rode straight here fast as I could. I figured you’d be eating lunch.”

JJ looked up, his eyes narrowing with interest..

“Whoa, Jenny. Slow down.” Stollar gestured with his hands. “Who are you talking about?”

“You know well as I do who I’m talking about. He had that long hippie hair, same scraggly long-ass beard, and that stupid fur cap. It was him. I know it was. He killed my damn cow. I think he saw me and was running to try and hide. You get your ass in gear you might be able to catch him.”

Everyone stopped eating at once and turned toward the sheriff.  Laurie stood motionless in front of him with a plate full of steak fingers and fries in one hand and a plastic ketchup bottle in the other, waiting as expectantly as the rest of the diners.

“Well,” he said, speaking aloud to himself. “I won’t be able to drive the patrol car up there in all that gumbo. I’ll have to go back to Livingston to pick up the four-wheeler.”

At this, JJ’s fists balled on the counter top. “The hell with that, Colton,” he said. “He’ll be long gone by the time you get back. Run me up to the ranch and we can grab a couple of horses and chase down that son of a bitch.”

Stollar turned toward JJ and appeared to be considering the offer.

Stollar paused a beat before replying. “You might have a point , JJ. I don’t like going up there without backup . . .”

Stollar looked at him impassively and continued. “I don’t like going up there without back up, but you’re right, we’ve had a hell of a time tracking him down, and this is the first sighting of him in months. Alright, JJ, let’s go up to your place and I’ll borrow one of your horses, but you aren’t coming with me. I don’t need any company.”

JJ glared back into the sheriff’s eyes, but didn’t argue.

The sheriff’s next words nudged the waitress into action again. “Sorry about that, Laurie. I’ll have to pass on lunch today. Put ‘em away for me and I’ll have ‘em  tomorrow.” Stollar grinned and winked at her then threw a five-dollar bill on the counter and tipped  his hat forward to sit upright again