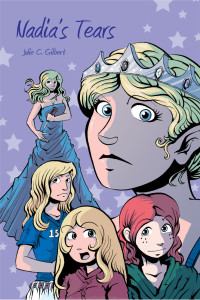 Jillian must enter Nadia’s dreams to wake her from a mysterious coma. In Nadia’s dreams, Jillian meets several versions of her sister, including the elegant Queen Elena, fierce Naidine, and heartbroken Nadie. Meanwhile, Danielle must save her friend Christy from making choices that could get them both killed.

Dr. S. said I ought to I write down anything and everything that worries me. Trouble is, since Daddy Three found me and showed me how to use my Dream Gift, there’s a great heap of worry to be found all over the place. Nana said worry beyond a certain point only weakens the soul, and Nadia agreed in sentiment if not actual say-so. That means they both said the same thing using different words.

Daddy Three, Dr. Dean Devya, Quinn, Father—as Nadia calls him—confuses me, which I count unsettling enough to file under worrisome. The man’s a weird mix of super-smart, real ambitious, and crazy with a side of cruelty that can steal your breath away. I asked Nadia why some people call him Quinn, and she said it means “counsel.” I guess that’s how he sees himself ’cause he’s the driving force behind a team of scientists who seek his counsel. That means they ask him questions and he answers or questions ’em back until they solve their problems. Miss D. used to do that a lot; it got mighty frustrating.

Dr. S. wants to know why Dr. Devya worries me. I find it disturbing that he feels humans are collections of genes that can be tinkered with at will. I ain’t ashamed of what I am, but I can’t square what he’s done with the notion that God forms babies in wombs. Does being lab grown mean we ain’t human? Writing the question makes it sound dumb, but I’m serious. What am I?

Deep debates aside, Momma and Isaac worry me for more

mundane reasons. Isaac Spencer Blairington is my new baby brother. He’s loud, cranky, and demanding, but Momma, Nadia, and Nana say that’s normal for a baby. He’s cute if you can catch him at a time when he ain’t redder than a fire engine. He gets that way when he’s full into a shrieking fit. Those hurt ’cause the little guy’s got good lungs.

My New Daddy—Mr. Jeffrey Michael Blairington—teases Momma by saying Isaac’s loudness musta come from her side of the family since he was a perfect angel as a baby. Nana admitted that could be true ’cause Momma was a loud baby.

Momma—Allison Michelle Blairington—worries me ’cause she keeps having these crying fits. They probably mean she’s just worried about me or stressed about Isaac. He worries me ’cause he’s perfect, but he’s part of my family and that means he’s in danger. Nana says I ought to not put such pressures on myself, and Nadia tried to tell me the probability of Isaac being in danger from Dr. Devya is very low. Still, I can’t help it.

Danielle got sucked into a whole heap of trouble just ’cause she was babysitting me. Dr. S. said projecting my worries on to my family might be part of what worries Momma so much. She also said I need to face these fears here and now and keep on facing ’em until I beat ’em.

TJ worries me ’cause he’ll eat anything. The other day he almost had the TV remote for a chew toy. I got it away from him while it still worked, but it was thoroughly gooed by that point. TJ spit is not all that pleasant. I’m afraid that if he was a mite bigger he’d try to swallow Isaac. It’s a good thing he’s just a little bite of a beagle. Dr. S. said a dog might be a good idea ’cause then I’d have a companion while my parents are busy raising Isaac, but I dunno. TJ’s kinda a handful. If we don’t pay enough attention to him, he howls up a storm.

Varick and Michio worry me. I’ve been assured many a time that they’re doing all right. Those nice FBI agents, Julie Ann Duncan and Patrick Duncan, called some people they know and got Varick and Michio placed in a safe home. It only lasted for a few months though ’cause then summer ended and the family wanted to send Varick to school. He took Michio and ran away. I think he shoulda left Michio with the family, but I understand why he didn’t. Still, open road ain’t a place to raise a child, especially one with Michio’s Gifts.

for the Lost Heirs. Both games are fun, but the second one is more important ’cause it might help us free the others someday.

Guess Nadia worries me the most. I try not to think about it, but my insides are all bunched up. Nadia and I have talked every day since she helped Danielle and I escape, but she’s been silent for three whole days. She hinted that changes might be coming, but I didn’t bust my head trying to understand it at the time. Nadia can be queen of all things cryptic when she sets herself to it.

Dr. S. wants to know what reasons I’ve got to worry for Nadia’s sake, and I ain’t rightly sure where to start. I know they changed locations soon after our escape, but that don’t change much. The fact that my sister is still within the same compound as Dr. Devya makes me uneasy, but as Dr. S. said, Nadia’s been his prisoner, student, daughter, and experiment all her life. So long as the situation is consistent, Dr. S. assures me there’s no cause for worry.

I asked Dr. S. if I could just claim gut feeling, and she just gave me half a smile and shook her head. I racked my poor head again and again and finally settled on one fact that is disturbing above all else: Nadia’s silence.

Nadia Elena Ayers always has something to say, though she only sometimes voices her opinions. Mostly, she just analyzes situations and attends to her training. I hear her opinions because I bother to ask her about ’em. She’s not perfect but she is wise far beyond her years. In a way, I think that’s sad, for not much wisdom is ever earned from safe things like books. It is won through toil, purchased with blood, sweat, tears, and sometimes pain. That’s how she explained it.

Tonight, I’ll ask Varick about Nadia. She talks to him more than she talks to me, so maybe he knows why she hasn’t visited me in such a long time. I didn’t say anything to Danielle ’cause being a full-time student and a huge help to my momma gives her plenty to occupy her mind.

I hate to admit it, but Dr. S. was right. Writing down my worries made ’em much less scary. I just hope whatever’s keeping Nadia from talking to me is simple to explain and solve. When I see her, I’m not sure if I wanna punch her avatar or squeeze it in a painful hug.

I apologize for the long, long, long gap between letters. I believe I previously mentioned that my mother hired summer tutors to prepare me for my senior year. That’s right, tutors, plural. So while my friends whiled away their days on a beach, I suffered through Understanding Physics, Chemistry: The Central Science, World History, Antigone, The Glass Menagerie, and other literary delights. Between that and keeping Mrs. B. sane during the last few months of her pregnancy, my brain was too fried to wrestle with Jillian’s mental demons, too.

Now that school’s back in session, I can relax a little. It’s not the kick back and forget the problems of the world sort of relaxed, but I have enough emotional energy to know Jillian’s worried about something. No offense to her mom, but Mrs. B.’s still a bit of a basket case when it comes to worrying that Dr. Devya will do something disruptive again.

I guess Jillian comes by the worrying honestly. It’s a point for nurture over nature, seeing as Mrs. B. and Jillian apparently share not one drop of blood. That whole mess aside, I don’t think Devya’s what has Jillian upset.

I think I could spend my whole life studying Jillian and still not understand her. Maybe I should rethink my current life goal of becoming a psychologist. Not that being a psychologist is bad; it’s just that I don’t know if I can take the constant state of not knowing the

real heart of an issue. The direct approach may work with Jillian, but I’m not sure how many normal people it would work on. I’m not calling Jillian abnormal in a bad way, but she’s definitely special.

Ha, that sounds almost as bad. I give up trying to make it sound politically correct.

I finally cornered Jillian and made her tell me what weighed so heavily upon her mind that she nearly gave the new puppy a whole can of tuna fish.

Did she tell you about their puppy? He’s certainly cute, but he also has a spiteful little spirit. If he’s mad at you, you’d better keep your shoes on your feet. Let’s just say it’s safer—and drier—that way. Poor Mr. Blairington found that out the hard way. I don’t think he was very amused by TJ’s prank.

After much hedging, Jillian finally admitted her concern for Nadia’s safety. If I didn’t know it would make her hopping mad, I’d have laughed. Of all Devya’s Children, save perhaps Varick, I believe Nadia is the most capable of taking care of herself.

I’ve had several conversations with her. She started with an apology and explained her reasons for leading Devya’s henchmen to snatch me rather than Mr. or Mrs. Blairington. Despite being on the wrong end of that logic, I agreed with her assessment of the situation. That’s just it, Nadia’s the epitome of logic, reason, and sense, but she’s not necessarily what one would call predictable.

I did my best to reassure Jillian, but upon further questioning, she admitted contacting Varick in a dream and told me the contact had worried her even more. I’m sure she could give you a much more detailed report of Varick’s current plight, but the basic gist as I understand it is this: Devya wants Michio back. Devya’s more than happy to have Varick off in the real world, continuing his training through petty crime or simple lessons in survival, but he’s convinced they’d both be better off if the younger boy were returned to his care.

Quite frankly, I’m torn on the issue. Nobody asked my opinion, but I sort of agree that Michio would be safer with Devya. Safer doesn’t necessarily translate to better off. I don’t like how much control Devya can exert over all these children. I can just see that getting out of hand very quickly. Besides, Michio is probably mentally better off with Varick. I can’t believe I just said that.

Poor Michio. The kid probably doesn’t have a chance in the world if his two father-figure options are a crazy scientist or a crazy soldier-boy prodigy of that crazy scientist.

Mrs. B. and Isaac are down for the count. Jillian’s doing homework. I’d better go check on the roasting chicken. Who’d have thought I could be so kitchen handy?