Sign UpLogin
You are here: Home / Books / Nowhere To Hide 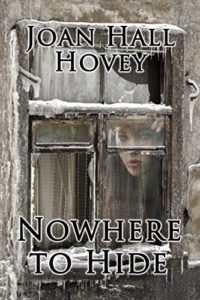 NOWHERE TO HIDE  Winner of the Eppie Award for best Thriller

It was nice to be alone. As she brushed her hair, Gail launched into her favorite fantasy of buying her sister a white Ferrari. Ellen’s birthday was coming up in May; she’d have the car delivered right up to her door, a big red bow tied on the antenna … dream on, girl she told herself, grinning at her reflection in the mirror.

Tiger padded into the room just then, winding his sleek, warm body around her bare ankles, purring like an old washing machine.

I owe her so much, Tiger, Gail said, reaching down to stroke the cat’s soft, glossy fur. If it wasn’t for…

Suddenly, Tiger’s back arched under her hand and he hissed. Gail’s heart leapt in her breast and her hand drew back as if burned. “What the…?” But Tiger, fur standing on end, had already fled the room. Gail turned in her chair just in time to see his electrified, retreating tail…

Then she caught a movement from the corner of her eye. Turning, she froze at the sight of the closet door slowly opening.

The closet door was at the top of the stairs at the end of the hall. To get to it he had to pass by two doors, one on either side, both now partly open. He could hear talking, very low. Farther away, the sound of running away. In three quick strides he was past the doors and inside the closet. He knew he was smiling. He felt excited the way he always did when he got past them. Even if anyone had got a glimpse of him, it wouldn’t really matter. He was invisible. The invisible man.

The secret door was to his right, just behind the wide rack of musty-smelling winter coats in varying sizes. He ducked beneath them, and opening the door, let himself into the narrow, cave-like space.

The space separating the inside and outside walls went nearly the whole way round the third floor, stopping abruptly at the wall of the stairwell where he had to turn around and go back the way he had come. Once, this space had been used for storage – old bed springs, broken chairs, trunks – but the doors, except for the one in the closet which he had come upon quite by luck, and through which he had come again and again, had long since been replaced by sheetrock and papered over with rose-patterned wallpaper.

It was pitch black in front of him and all around him, like he was all alone in the world. He had his flashlight, but didn’t turn it on. He knew the way. Besides, it might shine through someplace.

As he made his way along the darkened corridor, breathing the stale, hot air, his progress slowed by the long, heavy skirt he wore, he had to stoop. At seventeen, though narrow-shouldered, he was nearly six feet tall.

Sweat was trickling down between his shoulder- blades, and under the wig, his head felt squirmy, so he took the wig off and stuffed it into his pants pocket, under the skirt.

And then he was there. He could see the thin beam of light shining through, projecting a tiny star on the wall. It was coming through the place where two Sundays ago, when they were all at Chapel, he had made a peephole. He’d made it by simply pounding a nail through, then drawing it cleanly back out so that there would be nothing detectible on the other side – no more than a black dot.

A giggle floated through to him and the smile froze on his face, his fists clenching involuntarily. No, it can’t be me they’re laughing at. They can’t see me. They don’t know I’m here. I’m invisible, remember? Calming himself, he slowly brought his face to the wall.

Eight narrow, iron-framed beds faced him, each covered by a thin, grey blanket with a faded red stripe across the top and bottom. Twelve beds in all, but the two at either end were cut from his view. A few religious pictures hung above the beds. The one facing him said ‘Suffer the Little Children to Come Unto Me’. It had a picture of a lamb on it. Only three of the beds were occupied. It was still early. Some of the girls were probably downstairs watching their alloted hour of T.V. Others would still be doing kitchen duty. At least one troublemaker would be doing ‘quiet time’. He grinned.

He understood now that the laughter he’d heard had come from one of the two girls sitting on the edge of the bed flipping through a teen idol magazine. He’d caught a look at the cover – some weirdo with a green punk hairdo and a guitar slung around his neck. The two sluts, heads together, were still at it, giggling, whispering, low and secretive. He felt a hot surge of hatred course through his veins. He wished SHE would walk in on them right now. He knew what they were doing. They were talking about who they liked, who they thought was ‘cute’, who they would let do it. They were thinking and talking about that.

Two beds over, a fat girl with short brown hair that looked as if someone (guess who? Ha-ha) had cut it around a bowl, lay on her back with her hands behind her head, staring at the ceiling. A jagged scar travelled from a spot between her eyebrows right up into her hairline. He could tell she’d been crying; her raisin eyes were all red and puffy, practically disappearing in her moon face. They cried a lot in here. Mostly in the middle of the night when they thought no one could hear. It always excited him hearing their soft muffled sobs. Sometimes, though, it just made him mad like it did when they laughed. Then he wanted to fix it so they didn’t make any sound at all.

His gaze wandered back to the girl who had first caught his attention, the one who sat under the lamb picture, and who he’d wanted to save for last. She was sitting cross-legged on the bed, a writing tablet balanced on her knees, her long, pale hair fallen forward, though some damply dark ends curled against her neck. He watched as she scribbled a few lines, then frowning, looked over what she had written. She would chew on her yellow pencil, then write some more, the pencil making whispery sounds on the paper. He watched her for a long time, taking in the flushed, shiny cheeks that made him think, as had the darkly damp curls, that she might just have stepped out of the bath. Yes, he remembered hearing the water running. He liked to see them when they just got out of the bath – all that damp flowing hair, pinkly scrubbed skin, soft necks. Sometimes they changed into their flannel nightgowns right there on the edge of their beds, right there in front of him – though of course they didn’t know that.

That was the best part. Them not knowing. It didn’t matter that they dressed so hurriedly and so slickly that he often didn’t get to see much. Though occasionally there was a flash of white shoulder, a curve of breast.

I’m watching you, he thought, and had to stifle a giggle of his own.

And then she raised her head and those clear blue eyes were staring right at him, stabbing fear into his heart. He couldn’t move.

She was frowning, not in the way she did when she was thinking of what to write, but with her head cocked to one side, as if she were listening for something. A terrible thought struck him. What if he hadn’t just almost laughed, but actually done it, right out loud? Adrenaline pumping crazily through his body, he backed slowly away from the peephole. Standing perfectly still with his back against the wall, he waited. When after several minutes there were no screams, no sudden cries of alarm to alert the other girls – and HER, especially HER – he began to relax. His heartbeat returned to normal; once more he brought his eye to the hole. She was back to writing. Of course she was.

He smiled to himself.

He hadn’t laughed out loud, after all. And she hadn’t seen him. Of course she hadn’t. His gaze slid down to her breasts, their shapes round and firm as little apples under the flannel nightgown.

But you will, he thought. You will.