Sign UpLogin
You are here: Home / Books / Omniverse: Book I of the Omniverse Chronicles

Omniverse: Book I of the Omniverse Chronicles 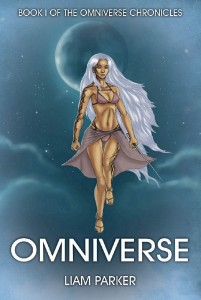 A vastness to shatter Einstein’s mind . . .

The Sublime, The Absolute, The Eternal looked down upon a cyclopean chessboard that stretched beyond the farthest reaches of time and space; beyond even Its own transcendent Self.  Brahma smiled, and a billion radiant galaxies blazed into vibrant life.

The Adversary, The Antagonist, The Arch Foe gazed down at the same board in its own fashion.  Shiva-Kali smiled as well, and a billion warm and living worlds flickered and died, with only short-lived screams that echoed through the Cosmos to mark their passing.

The Absolute gazed down at the countless chessmen that stood in serried ranks on Its side of the board, all awaiting Its call to dance their steps in the intricate and infinite pavane that was Chaturanga, the Great Game; kings, suzerains, marshals, chancellors, constables, queens, countesses, courtesans, bishops, Boyars, Bursegs, beggars, bezants, knights, cataphracts, rooks, Ronin, elephants, viziers, reivers, slinks, succubi, mages, chirrugeons, gorgons, knaves, proctors, harlequins, margraves, mystics, serjeants, inquisitors, sumners, dragomans, guides, pawns, proles, fays, minstrels, wardens, eremites, berdaches, bowmen, chimeras, gryphons, Stentors, fools, Amazons, Saracens,  Lombards, Devis, Merids, revenants, sicarii, Titans, Typhons, Wyrms both great and small, and host upon host upon host, and multitude upon multitude of yet more and more pieces in their endless array, an immense kaleidoscope of colors and shapes and sizes that strained the very fabric of the Universes that strove to contain them.

And there were other, less corporeal game pieces which would be in play on the board, but have no place on it.

Glittering motes that were galaxies drifted past the Absolute’s fourfold brow as It pondered Its opening move.  At last, smiles wreathed all four of the Sublime’s faces, and Brahma advanced a Paladin.  A most unwilling Paladin, but one that had served It well countless times before.

And would again and again through endless cycles of death and rebirth until the last syllable of Time Itself was but a faint and fading echo . . .

Shiva-Kali frowned at Its opponent’s bold and unexpected move.  Its bloodshot eyes grew wide and Its light years-long tongue dripped oceans of blood.  All four of Shiva-Kali’s blue-black hands knotted into fists, and It hissed like the Serpent hatched from the Cosmic Egg at the instant When All Began.

The Paladin stood upon the Board, armed cap a pie in gleaming plate, and gazed around him.  He waited, and what he waited for was not long in coming.

Shiva-Kali placed Its own champion, a Ritter, on the board with a vast night-black hand.  It wore pitted armor blacker than hate, and it glared at the Paladin with burning eyes.  For a moment, a blood-red caul wreathed its shaven pate, while its ancient enemy’s head was crowned with blue-white flame.  Paladin and Ritter raised the hilts of their swords to their lips in a brief salute.  They lowered their blades and waited: their wary eyes locked on each other.

Another Cycle of Chaturanga, the Great Game, had begun; and, as always, countless worlds were the hazard.

Night , San Francisco, autumn, 1973 . . .A Calliope was playing—and a leering clown with a butcher knife was stalking him.