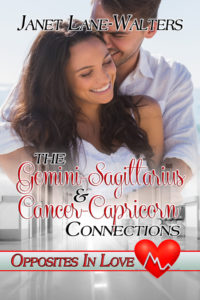 Gemini Liz seems to be following her sign. She’s the mother of twin boys, she’d returned to Eastlake for the second time and she’s taking her second position as a nurse manager. She feels moving from the city will be good for her sons who sometimes choose the wrong friends. What Liz doesn’t want is a second husband. The death of her fireman husband made him a hero but devastated her life. She had to return to work and become a single mother. Fortunately her father-in-law has stepped in to care for the boys but he wants to retire to Florida. Though she’s attracted to Jeff she wants to deny the attraction.

She’s a Cancer and he’s a Capricorn. She has a secret she wants to keep but moments after they meet again, he knows the secret. Her daughter is his and he wants to be part of her life.