Sign UpLogin
You are here: Home / Books / OUTCAST – Storm In The Kingdom

OUTCAST – Storm In The Kingdom 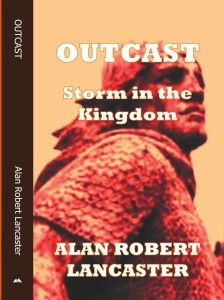 Father Cutha has Ivar banished from Godwin’s camp at Nazeing, for not repudiating the spay wife Braenda. Ivar rides for Wales with Oslac and Cyneweard. They are joined soon after by Saeward and Theodolf, who save Ivar from the clutches of Gilbert de Warenne – again – at Bruning’s inn near Oxford.

Riding west they meet Osgod and Harding with their men on the way from Jorvik to fight the Normans alongside Eadric ‘Cild’ and the Welsh princes Bleddyn and his younger brother Rhiwallon. In Wales Ivar learns his old nemesis Copsig has been appointed earl in Northumbria and is on his way north to take up his duties.

Crossing Shropshire and the Pennines in company with his friends and Harding, Ivar avoids ambush, takes the Norman earl William fitzOsbern hostage and crosses paths with Copsig in the wintry wilderness. Copsig is cornered by Earl Gospatric and kinsman Osulf at Newburn on Tyne, and Ivar finds himself tested in the first of many confrontations during the year following William’s coronation. On to Wales again…