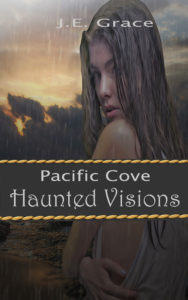 Naomi & Jason Sanders, move to Pacific Cove Ranch shortly after their wedding. Prior to her graduation from college, Naomi’s younger sister is killed in a hit and run accident.  Naomi is having a hard time accepting her loss, and the isolation of her new surroundings bring a new type of terror; haunted visions that keep her on edge terrifying her.

Is Naomi being tormented by her own inner demons or some new type of ghostly visions that haunt the Pacific Cove Ranch?  Can she survive or will they drive her mad?

Can she convince her family that she isn’t just grieving for her sister, but that these ghosts are trying to tell her about a secret she is supposed to discover?  Will she figure it out and prove to her family she isn’t imagining things?