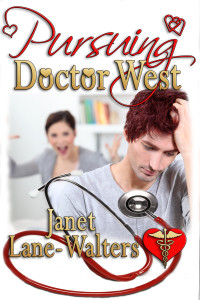 Michael West MD has a five year plan before he can consider making a commitment. He’s happy dating women who have no desire for a long-term affair. Encountering Zelda, the pest, the menace, the little girl next door who has impacted his life makes him want to run. She managed to ruin his senior prom and sent several of his dates running. Now she’s grown and the nurse manager of the surgical unit where he will see her every day. What’s a doctor to do but run?

Zelda has loved Michael for year. She knows of the odd accidents her presence has caused him. After an encounter in the condo swimming pool, the accidents become hers but she refuses to give up her quest. The problem is his dating system. He seems to be on an alphabetical quest. He’s just met G and she’s Z. Can she find a way to turn his thoughts to her or must she give up her pursuit?