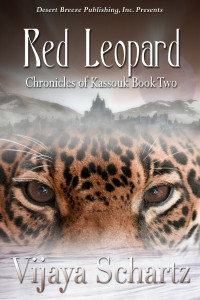 In charge of the fortress of Kassouk in the King’s absence, what is Terek to do when a Goddian spacecraft lands in his medieval backyard, and the striking woman leading the galactic party insists on colonization? Galya, the Goddian Princess commanding the geological vessel, is bent on finding a crystal with unusual hyper-conductor properties. And the futile resistance of the local population isn’t going to stop her. Not even that defiant tribal chief nicknamed Red Leopard, like the infernal feline that follows him everywhere. Terek and his band of swordsmen and felines must defend their people’s freedom, no matter the cost. But with this unexpected arrival, an old prophecy surfaces, taking new meaning and carrying a new threat… When political intrigues, greed, murder and betrayal tip the scales, whom can Galya really trust? Her fellow Goddians? The Mutants bred to serve her race? Or her primitive Human enemy?

“Packed with action and adventure. Galya … a tough warrior… a sweetness about her that makes her easy to like… I loved how Rascal was Terek’s faithful companion. I really liked Red Leopard.” Hope Chest Reviews