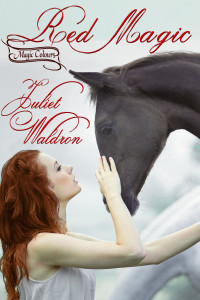 Red-headed Caterina von Velsen, a tomboy and superb horsewoman, detests her older sister’s husband-to-be.  Christoph von Hagen is handsome and brave, but he is also a Casanova, a man with a reputation that stretches from his mountain manor all the way to Vienna.  When Caterina’s older sister dies in a riding accident only a week before her wedding, Caterina is forced to take her place. She now belongs to a man she firmly believes to be “a cold-hearted rake.”

There proves to be magic in Christoph’s lonely mountain home, as well as in the locket Caterina’s aunt gave her long ago.  Misunderstandings and preconceptions hinder true love, as well as the strange attraction she feels toward her husband’s magnetic, foreign born horse master. When her officer husband is sent to the Turkish frontier by the Emperor, Caterina, in love at last, sets off to find him. Her impulse nearly brings death to them all when she is captured and placed in a Pasha’s harem. Set in 18th Century Germany, RED MAGIC tells the story of a young woman’s transition from rebellious girl to adored–and adoring–wife.

“Ha!  See her coming out of the pines over there?”  Christoph von Hagen, his hazel eyes narrowing, lifted a muscular arm to point.  “Just as I thought.  She went through the rocky thicket south of von Beilers’s woods.  Now she’s angling this way, the crafty vixen.”

The red Arabian mare with the taffy colored tail had begun a wild gallop across the pasture.  The breakneck daring left no doubt that a superbly confident rider was astride.

It was a game, a game played by young aristocrats, a wild and dangerous game of “Fox and Hounds.” Several “Foxes,” given a head start, must reach the safety of a goal, riding across rough country, while the “hounds,” rode after them in hot pursuit.

The well‑to‑do players wagered among themselves on every possible outcome, but the prize for any fox who escaped was largest, particularly because it so rarely happened.  Today escape was to be rewarded with a spirited yearling colt.

“But,” the speaker went on, a wry smile on his handsome face, “no one will ever catch that whirlwind of hers on the flats.”

Christoph von Hagen and his cousin Max had ridden fast, intent upon getting ahead of the hunt and setting an ambush for the last uncaught ‘fox’ at a steep hill just before the goal.  Sitting easily on a powerful bay, Christoph was an Austrian nobleman in his middle twenties.  He was tall, erect, and, under the fine tailoring of his elegant clothes, muscular.  His dark, curly hair was captured in a black queue ribbon, and his large eyes flashed with intelligence and humor.

Along with an exceptional body, men and women alike agreed that von Hagen was good looking.  Men described his face as “open” or “forthright.”  The praise of the women was a good deal warmer, tending towards the classical.  “Like some pagan god” was the phrase most frequently whispered behind fluttering fans.

Von Hagen’s companion shaded his eyes with his hand, trying to get a better look at the horse blazing across the flower dotted green below.  His more ordinary blonde good looks were diminished by proximity to the dark giant.

“Hers?  A female?  Riding like that?”  Fox and Hounds was considered too dangerous for the gentler sex.  And wasn’t this fox astride?  Astride and wearing trousers?

“The Devil,” the smaller man abruptly exclaimed.  He’d answered his own question.  “It’s Caterina von Velsen and her red Moroccan.”

“And you know how well that rascal rides.”  Christoph said with a broad grin.  “Besides, there’s not a horse around that can catch that mare of hers over the flat, not even my Brandy.”  One strong hand gave his mount’s glossy, sweating neck a pat.

As if he understood the urgency, the bay stallion reared.  In the next instant horse and rider were plunging down the hill, showering earth and green grass behind.

“Christoph,” called his companion, hurriedly spurring after.  “The dike!  You can’t go that way!”

If von Hagen heard, he paid no attention.  The big bay, black mane and tail flying, continued on course straight towards a lethal looking heap of broken stone.  It would have to be taken in one leap, for landing atop it, would certainly break the horse’s legs.                                  No one had risked his mount across von Beiler’s dike in a generation.  Max could hardly believe Christoph would.  Cousin von Hagen’s horse was a rare Prussian, bred in the stables of the warrior Elector Frederick, and worth a small fortune.

As he came parallel to the dike, Max reined in to watch the impossible.  First came the gathering of the powerful burnished hindquarters of the Prussian, then the breathtaking leap as the bay tucked up his high black stockings and rose skyward.

Max gave a whoop as giant horse and rider flew over the murderous pile with all the elan of a bird of prey.  The clean landing on the other side led at once to a resumption of the same regular hoof beat thunder, a relentless charge.  Giving another sportsman’s cheer, Max kicked and used his whip, beginning a hasty circumnavigation of the dike.

As he rode forward, he could see the hurtling fox‑‑Caterina von Velsen‑‑speeding on a parallel course.  Her mare was fully extended, never more than one foot on the ground.  The girl’s hat, which she’d worn to hide her hair, had blown off and now her thick braid writhed like a red snake behind her.

More riders, a troop, boomed over the hill.  Throwing a glance over her shoulder, Caterina knew that of two foxes, she must be the only one left.

There was a momentary flash of triumph.  The yearling would be hers, and how proud Papa would be!

“Gottesblut!” Cursing was unladylike, but it was precisely what she felt.  She had at once recognized the big Prussian bay and his equally imposing rider.

Christoph!  The only one with the horse, the skill and the guts to try it…

Both horses thundered towards the bridge.  For a moment it looked as if they would meet head on. Caterina reined her red mare hard.  An impossibly sharp turn later, horse and rider plunged off the high bank, landing with a huge splash in the river.

It was deep here, perhaps deeper than Caterina expected, for it had been awhile since she’d been hunting around von Beiler’s.  Her mount came up swimming.  Swollen by a recent rain, the water was rushing, carrying them swiftly downstream beneath the bridge.

“Come on, Star,” she urged, grasping the mare’s flowing mane.  The bank was lower on the goal side; the water was shallower.  It would be easy to get up.  She could still win.

As horse and rider swept beneath the bridge, there was a drum roll of hooves above and then an overwhelming deluge.  Caterina was still blind and gasping when a man’s big hand came out of the water and seized her braid.

Furious, struggling with him in the water, she let go of the horse and began to lash at him with her riding crop.

“Hey!  Foxes don’t carry those,” he cried, wrenching it out of her hand.  “And I didn’t cheat.  Brandy jumped the dike fair and square.”  Firmly putting one big hand on the top of Caterina’s red head, he dunked her.

In the meantime, the mare had continued her push to the bank.  When Cat came up again, choking and sputtering, the first thing she saw was Star scrambling out, her flaxen tail a darkened, dripping tatter.

Christoph, so tall, soon found the bottom as well.  With an arm around his coughing quarry, he breasted the water.  In another few minutes, he dumped Cat unceremoniously onto the bank.

Grinning, von Hagen threw his considerable length onto the grass beside her.  He was equally sodden, but his expression was one of complacent satisfaction.

“You hit me with your crop, so I defended myself.  Don’t be a poor sport, Caterina.  You were a clever fox, absolutely the best I’ve ever chased.”

“Why did you have to come back from Vienna?  And what are you going to do now that you’re here‑‑tell Wili more lies and then let her down again?”

“Scratch, scratch, fierce Cousin Cat.”  Christoph pinched her nose.  “You know your sweet sister always forgives me.  Some day you’ll fall in love yourself and then you’ll be some fellow’s pretty toy too, Stork Legs…”