Sign UpLogin
You are here: Home / Books / Reunion – the novel 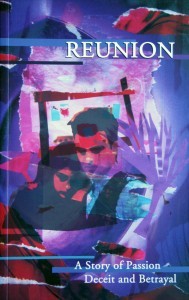 Sex, guilt and death – the ultimate cocktail! Now also due for worldwide digital release as a Kindle e book in 2016, Scott Hastie’s steamy first novel is a fast-paced romantic thriller. A story of passion, deceit and betrayal… With an impressive house in the country and the unquestioning love of a beautiful young woman, many years his junior, 44 year old Adam Lawton seems to have everything a man could reasonably hope for. However, just when it seems his life can get no sweeter, a proposed college reunion looks likely to reveal guilty secrets which he has hidden away for over twenty years… And as members of what were once a close knit group begin to reassemble, other home truths, long since cloaked in duplicity and deceit, also begin to bubble to the surface with a sudden force that threatens to overpower all their lives.