Sign UpLogin
You are here: Home / Books / Ring of Stone 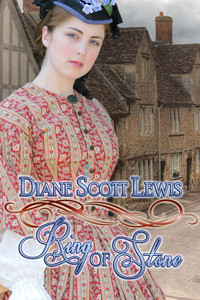 Rose Gwynn is determined to study as a physician in 1796 in England, a time when women were barred from medical school. When she prevails in assisting the local doctor, Rose uncovers a shocking secret that will threaten Dr. Nelson’s livelihood. Servant Catern Tresidder returns to the Cornish village to confront the man who raped her and committed murder. After Rose’s sister is betrothed to this brutal earl, Catern struggles with her demons to warn Rose of the truth. Rose’s attraction to a man far beneath her further complicates her situation. Three people fight society’s dictates to either face ruin or forge a happy ending. Through it all, the ancient stone circle near Rose’s house holds the key to her family’s past, and is positioned through the myths of Cornwall to save her sister’s life.

Charlie slipped back behind the gorse bushes as the young woman and the stocky boy left the stone anomaly shaped by wind and rain. So this was part of the American family who were moving into the old house. Charlie brushed a hand over the thick warm fur of Paddy’s head. The dog raised his nose and wagged his bushy tail. The two continued to stroll along the rocky trail and dipped under a canopy of trees.
“I’ve heard their father will be a banker in Bodmin. But why did they move out here, miles away? These people’s intrusion unsettles me, Paddy.”
The red setter panted and barked—always attentive to his owner’s voice. Did the dog ever pine for him, his first master? Charlie often did, at night, in what seemed like endless moments of solitude.
Their feet crunched over twigs as the scent of white Campion sweetened the breeze. Sprigs of shy violets formed bursts of color, darkened to the shade of blood by the setting sun.
“I’ve just become used to the inhabitants here, and now strangers arrive. I fear that everything might change. You always take chances with new eyes and opinions. The excuses start again, the avoidance, the anxiety of having to lie. But I must finish what I started. I have a prominent position here and don’t wish to jeopardize it.” Charlie hurried their pace. “Let us run, old boy, it will ease my trepidation. If we’re fortunate, though it’s unkind to say so, these newcomers will find the village not to their liking and won’t stay long.”