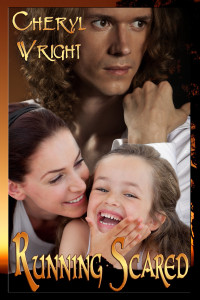 Emma Larkin is running for her life – nowhere is safe. Stalked by her husband’s killers, and desperate to protect her young daughter, Emma must find what the killers are looking for before she becomes their next victim.

When undercover cop, Gary Bedford, planned a relaxing break, he hadn’t counted on bumping into Emma. Now he can’t resist the temptation to discover all her secrets.

But should Emma trust her life and heart to Gary Bedford?

Can they solve the mystery surrounding her husband’s death – and uncover his deadly secret?

What did we do to deserve this? Emma Larkin sat on Sally’s bed assessing the damage. The padded bed head had been slashed, clothes were hanging out of drawers, even the toy box had been up-ended.
“I thought we’d get away from all this,” she said, to herself more than to her four-year-old daughter.
Tears slowly trickled down her face as she picked up Sally’s music box, trying to put the broken toy back together. What they’d do now, she had no idea.
The local police had been of no help. This was way out of their league.
She’d left what little family they had back in Melbourne. She had absolutely no one to turn to.
The move to the countryside was a last ditch effort to get their lives back on track. All this upheaval had achieved very little Emma decided.
“Don’t cry, Mummy,” the little girl told her, reaching out to give her mother a hug. “We can clean up the mess, and Uncle Coop will fix the music box if I ask him.”
Sally planted a big sloppy kiss on her mother’s cheek before settling herself comfortably on Emma’s lap.
“Four days in a new town, a new home, and already…” Emma quietly sobbed.
Life had changed dramatically since her husband’s murder two years ago.

“But mummy, I liked that house,” Sally said, pouting. “Why did we have to move again?”
Emma sighed, but explained patiently, “The bad people found us again, Sally. We couldn’t stay there any longer.”
Sally thought about it for a moment. “So does that mean the bad people can’t find us now? Can we stay here forever?” Sally looked to her mother for reassurance. “I like this place. Please can we stay? Please?”
“Sure,” Emma answered. “We’ll stay. We’ll make it so they can’t find us again.” Emma smiled at Sally with renewed confidence.
This large country town was the answer to their prayers she was sure. She’d been so wrong in choosing small towns before. It was too hard to hide – everyone knew everyone. But Bairnsdale was large enough that they would blend in. Their arrival wouldn’t even be noticed.
The brown hair dye was a nice touch. There was nothing like flaming red hair to make a person stand out.