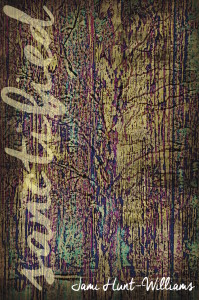 Secrets are like dead bodies; if not properly buried they begin to seep and destroy. Stanford Grandling has plenty of secrets and only one dead body, but the time is coming when she will have to reconcile both. A younger sister driven crazy by the past that they share and a secret so vile it could destory what is left of the small town of Black Creek, Stannie faces and makes decisions that will change the course of every life stained by the secret buried in Black Creek.

Sanctified is a story of devastating loss and the horrifying prospect that the process of redemption can be just as devastating.

…so most people return home for one of two reasons:

to either find something they left behind or to kill

something they can’t leave behind.

The smell of Sweet Annie was thick in the air, sugary and fruity it hung, draped across the crisp breeze. Stannie drove slowly down the dirt road, a canopy of heavy green maple and cedar bending over the old Malibu, reluctantly chugging at the very thought of the Ozark inclines and the ground showing faintly through the passenger side floorboard. Even with the windows rolled up, she could smell the damn Sweet Annie and she felt the saliva gather in the sides of her mouth. She thought about stopping and making herself throw up, but she feared, be it rationally or irrationally that the smell of the ugly greenery would become embedded in her hair.

“Everything is so damn green…” she muttered to herself, flipping on the radio and desperately punching the resistant black tabs. Black Creek Township was just far enough from everything that AM frequency was usually a better bet than FM frequency. A quiet crackling finally gave way to the faint loneliness of good old Hank Williams and Stannie gently smiled. “Welcome home to me.”

As she crossed the makeshift bridge over Ten Point Creek, she swallowed hard. The bridge was actually a few old plank boards laid out in the approximate width of the average pick-up truck chassis. “Prayer and a good breaststroke…” she repeated the words her mother used to say every time they would cross that bridge in the big cream colored LTD. She could smell the faint aroma of her mother, a blend of cigarette smoke, hard liquor, and White Shoulders perfume blended with the Sweet Annie somehow and she choked back the vomit once again. Haydn Grandling had long left the planet, a fact that neither bothered nor saddened Stannie. If there was a hell, she assumed by now Haydn was running it; if she had made it to heaven it was probably the first time she had to work for a living, or at least that’s what Stannie pictured in her mind. Her mother’s spiritual situation was the least of her worries when she found out the alcohol and cigarettes had finally mustered up the strength to pull off a coup. She died in the dressing room of the new Macy’s in St. Louis. “With her boots on…” Stannie thought to herself, yanking the wheel to miss a chug hole she remembered from her childhood. The road was slowly disappearing into the weeds and grass and Stannie was prepared to hike. She stopped the Malibu where she sat and it clunked and whirred in protest.

Climbing out of the car, she reached into the backseat and yanked out a large duffel bag. Throwing it over one shoulder with ease, she grabbed the keys from the ignition and slowly backtracked to the creek. With one strong motion, she chunked the keys into the creek, smiling happily at the dull plunk they made when they hit the water. She walked back to the old Malibu and gave the car a kick in the side panel, feeling no satisfaction whatsoever at the ceremonious gesture of hatred and disrespect. What wound be found in the trunk, or rather whom would be found in the trunk, would be enough to throw them off for a while. Stannie thought for a moment about the precious scene she had savored in her dreams for the last 15 years. The local law enforcement would flounder under the weight of her one-day crime spree, probably eternally confused, hopefully infinitely flummoxed enough to not put the pieces together. She wasn’t the kind of cold, calculating criminal it took to get away with things like this – she was counting on the appearance of randomness and the fact that no matter what, there was nothing at all that could connect her to a desire to perform any of the hateful, horrible, and, she felt, completely justified acts she was preparing to complete. She had come too far to not finish. It was deserved and it was done and she was prepared to pay penance if need be, for the avenging she had taken from the good Lord’s hand and doled out on her own.

She walked the trail back to the car, the weight of the duffel bag wearing on her shoulder. The car was just as she left it, proof positive that she hadn’t dreamed the incident and even though she would never be able to look in the trunk and see the fruits of her labor today, she imagined that he looked in death as he had always looked in life: a liar, a monster, a demon who had stolen from her. She felt the vomit rise in her throat and burn into her mouth, but she clenched her teeth and swallowed it back down. She wasn’t going to risk something stupid like leaving her puke beside the car. She didn’t know if vomit had DNA in it, but she wasn’t going to take a chance on anything scientific putting her at the scene.

She had been careful when she had done it. And he was so old now; it almost didn’t seem fair to prey on someone so defenseless; it was the knowledge that he had never once shared that sentiment when it came to his victims that pushed her on in her endeavor. Time had made him lame in one leg and had curled his hands to the point that the tips of his long fingers touched his bony wrist. Barely able to walk, but still so eloquent in speech he had almost talked her into forgiving him, into letting him finish the life he was near ending. Stannie could have walked away knowing full well he would never mention her visit. There was no one left for him to tell. But she couldn’t get past the smell of the Sweet Annie.

Had his windows been closed perhaps it would not have been so prevalent, perhaps it would not have burned the sides of her nose as she stood over him and asked her questions. Perhaps if there wasn’t the same picture on the wall hanging over the same buffet in the dining room: Jesus, surrounded by children, smiling lovingly at them, the painting had faded and needed to be dusted, but it was still there, just as it had been 28 years ago. Stannie kept talking to him, just as she had planned, as she did the things she had promised herself she would do, but she kept looking at that picture. She looked at that redneck version of Jesus, his blue eyes, even though he was middle-eastern, as she held the old man’s tongue with a pair of kitchen tongs and sliced it off, leaving it lying on the floor beside the chair to which she had taped him. She looked at the painting, wondering what Nazi version of Jesus this was, contemplating the reddish-blonde stick-straight hair as she gingerly sliced through each eyelid, leaving them laying like maimed little spiders on either side of the chair. Jesus had watched, just like he had watched all of those years ago, but that was not the Jesus she believed in anymore, wispy and willowy and serene. Her Jesus was a warrior, and now so was she.

Standing beside the car, she reached into the duffle bag and pulled out the black book she had lifted from the table beside his chair. It was his Bible, tattered and worn with scribbling and scrawling in the margins, and as she leafed through it tearing out a page here and a page there and stuffing them into the gas tank of the old Malibu she thought it so ironic, the number of times she saw her own name. The number of times she saw her sister’s name scribbled in the demon’s script in the most sacred book in history. Every picture in her mind of that man contained that Bible; he carried it everywhere and was never without it. Most would say that was perhaps the strongest testimony of a man of God, devoted to the point of never being without the Lord’s instruction close to his heart. But she knew the truth. She knew that the black, leather book that reeked of the scents of his body was no instruction manual; it was instead a carefully kept record of wrongs so atrocious she couldn’t believe the good Lord himself hadn’t reached down from heaven and ignited the thing.

She didn’t know if the man in the trunk was dead yet or not…there was no sound and there had been a lot of blood when she sliced his tongue out. But what had not been taken care of previously would be taken care of now. She closed the Bible and put it back in the duffle bag searching blindly for the box of matches. She struck one with determination and placed it in the grass next to the Malibu where the pages of his Bible now hung out of the gas tank. She didn’t know how long it would take, she didn’t even know if it would work, but she figured one way or another he would be dead in a few hours.

She had walked a half-mile up the road that was once worn out by the devotion of his congregation but was now covered with tangled weeds, overgrown Sweet Annie, and the occasional beer can. She was headed to the church to finish it all; the last must on her to-do list. Through the trees, just as she caught a glimpse of the church’s crumbling steeple, she heard a muffled thud and the fading sound of shattering glass. Only then did Stannie let herself smile.