Sign UpLogin
You are here: Home / Books / Sarcasm is My Superpower

Sarcasm is My Superpower 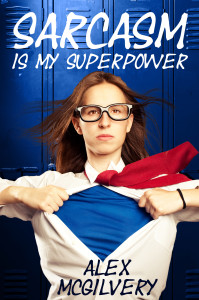 Sarcasm is My Superpower began as a High School novel spoof on Wattpad. It morphed into  something more complex than a simple spoof. In its final version it still retains the edge of humor, but it is more than a funny story.

Please note the fantastic cover by Victorine Lieske of http://bluevalleyauthorservices.com

Here are a couple of sample chapters from the book.

Sarcasm is my Superpower

My mom has forgotten that High School isn’t the golden years. It’s a battle zone. If she’d remembered that, she wouldn’t have named me Petunia. She wouldn’t have taken me shopping to squeal about cutesy outfits that no self-respecting kid would be caught dead in, never mind a seventeen year old, especially if she looks like she’s only twelve. She’d be buying me some fricking battle armour.

So here I am on my last, first day of school. I’ve only got ten months to survive before I go out into the world to learn what is so bad that it makes High School look good.

The doors of the school are painted a fresh bright blue.,our team colours in fact. We’re the Punkie’s Hounds High Blues. You’d be blue too, if you had to live in a place called Punkie’s Hounds Corners. I mean, really? Our claim to fame is that in the back end of nowhere, seven roads meet at one corner at the most complicated set of traffic lights on the planet. I think the surveyor wrote that on his map because it was too early in the day to be drunk enough to write what he should have written on that map. Of course if he had, we wouldn’t have the name of our town printed across the front of our T-shirts now, would we?

Scratched in the fresh paint of the doors was Rickard is a dich. That gave me my first good laugh of the school year. Only a football player could screw up simple graffiti that badly. According to my mom, we are all like super heroes.

In that case, my super-power is sarcasm.

“What kind of name is Petunia?” Chastity sat beside me in home room and waited for me to burst into tears. It after all happened just like that four years ago in this very room.  No wait, my bad, it was in the Ninth Grade room. We were both Nifty Niners back then, though she was already showing signs of being much niftier than me.

“Hi Chastity,” I said. “My summer was great. How was yours?”  She looked momentarily confused, but decided to carry on.

“I mean, Petunia,” she said loudly, “isn’t that Porky Pig’s girlfriend?”  She got the predictable laugh. She’d been doing this for four years and she had the timing down perfectly. It was like watching re-runs on TV. It was time to change the channel.

“Well, yes, Chastity,” I said putting as much brightness in my voice as I could. “Petunia was Porky Pig’s girlfriend. You’ve got me there.” I didn’t get much of a laugh, except from Ron the stoner who sat behind us. I don’t think he was actually laughing at my comment. He’s just slow. Really, really slow. He was probably laughing at something somebody said last year. “Petunias are a mild hallucinogenic used by Ecuadorian Natives. My parents must have been Incas in a previous life.”

“Really,” I turned and looked at him. “Why else would they name me for their sacred flower?” He looked puzzled.

“What are you talking about?” he said.

“My parents being re-incarnated Incas.”

“No,” he said, shaking his head, “about the petunias getting you high.”

Trust Ron, the only multi-syllabic word he knew was hallucinogenic. I smiled at him. “Don’t be chewing any petunias, Ron. You don’t know what’s been put on them.”

“I know this great organic gardener,” he said.

“Don’t try to change the subject,” Chastity said. “Everybody knows that you’re named after a pig.”

“As opposed to someone who’s named about a virtue that they gave away in the sixth grade.”

“I was named after Sonny and Cher’s kid.”

“Didn’t she change her name to Chaz and grow a beard?”

“I’m sure Cher doesn’t have a beard,” Chastity said, “Moron.” She oinked a once or twice for old time’s sake, but she’d lost the beat.

Mr. Hand walked in and looked at us. I’m sure he looked older than last year. More grey hair, more wrinkles.

“Class, before we go over the rules of the school, I have an announcement. The washroom in the lower senior hall has been designated for the sole use of Marilyn.”

“Why does this Marilyn chick get a whole washroom to herself?” Chastity asked. I could hear some supportive muttering from the rest of the blonde squad. That washroom was prime turf. No girl dared darken its doors until their graduating year. It was tradition, like Chastity trying to sleep her way through the entire football team.

“It is the Board’s decision,” Mr. Hand said. “There are special circumstances.”

“Like me,” the door opened behind us and everybody turned to look at who had said that. Standing in the door was a vision in pink. Marilyn wore a wicked pair of pink stilettos with pink skin tight jeans and a skin tight tee to match. All that pink was covering a body that would make a cheerleader pant. Buff doesn’t describe it. He/she looked like one of those impossibly muscular men on the covers of the books my mom likes to read. Add dangly earrings, fire engine red lipstick and a neatly trimmed goatee and you have a vision of confusion.

Needless to say, Mr. Hand didn’t get to go over the rules for one last time before we graduated.

There might just be something worse than being named for Porky’s girlfriend.