Sign UpLogin
You are here: Home / Books / Seducing The Doctor 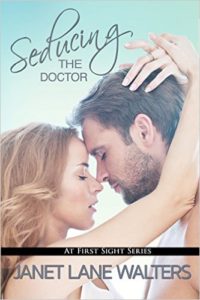 Those words send Matt Blakefield fleeing his brother’s wedding. Marriage or even falling in love is the last of his desires. What he wants to learn is the identity of the owner of the house he wants to use as a make-over for the magazine he edits, Good Livin’. A fall rainstorm and a pine tree sends his motorcycle into a spin and into the arms of an old acquaintance, a girl he hurt in high school.

Cassie Moore has borrowed a cabin from one of her partners in a cardiology practice to come to terms with a broken engagement. The news came via an email. Her fiancée had married another woman just weeks before their scheduled marriage. The appearance of Matt at her door brings an old attraction into full bloom. She realizes love is lurking but he’s a player and she needs to forget the connection.

Is it possible that a weekend of love can become a lifetime?