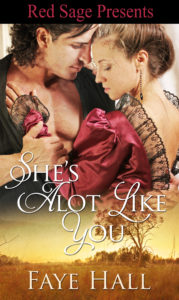 Willow Jameson knew nothing of her family’s past or their connection to the Morgan family when she first met Re Morgan.  All she seen was his ruggedly handsome appearance, his gentle words luring her into his strong embrace.  What she found was a passion beyond compare.
She couldn’t have foreseen the lies and family betrayal that would inevitably rob her of the man she loved and forever change her life.
TEN YEARS LATER
Willow returned to the town life she loved so much, no longer ignorant to those who had separated her from the man she’d loved.  She was back now to make those responsible pay for all they’d taken from her.  In her search what she found was the hardened man Re Morgan had become…
…a man who’s mere glance reignited a passion she had thought long since forgotten.
Re Morgan had left a horde of jilted lovers in his trail.  When he seen Willow again across the crowded dancehall, he wanted nothing more than to add her to this list.  Re wanted little more than a short, heated affair.
What he became involved in was far more scandalous than he could have ever imagined.