Sign UpLogin
You are here: Home / Books / Shimmy for Me 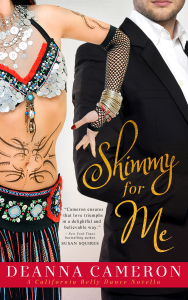 Juggling two jobs to keep her belly dance studio afloat keeps Abby Anderson’s mind off her shattered love life—until a reawakened pain sends her into the arms of an anonymous stranger she plucks from the audience of her tribal belly dance show. No names, no strings, no romance. She tells herself it’s a harmless hookup.

Derek Collier, the sexy heir to the Collier media dynasty, just landed everything he’s always wanted: the publisher’s seat at the Orange County Herald. Except his first order of business is to sell the newspaper. Reeling from his family’s betrayal, his only comfort is the memory of that mysterious belly dancer and the perfect night they spent together.

He won’t rest until he finds her again.

She’ll lose everything if he does.

“It’s only sex,” Abby Anderson said, keeping her focus on the mirror propped on the desk in front of her and the black eyeliner wand in her hand.

In the corner, Melanie flipped through a tattoo magazine. “It’s about time. How you managed to go a whole year is a mystery to me.”

“It’s not like I planned it. It just happened. I’ve been busy.”

Busy working two jobs—three if you counted the belly dance studio that was consuming every spare minute and dollar she had. It didn’t seem possible that so much time had passed since her ex had given her the ultimatum: him or the studio. He didn’t understand how she could leave graduate school and the prospect of a comfortable career to devote herself to what he considered a dead-end business. That’s when she knew he didn’t understand her—and he never would.

Most days, she was too busy to think about her wreck of a love life. Today she could think of little else.

May 1. Seeing the date on the calendar had brought it all back. That last terrible fight. All the awful things he’d said to her. She knew they weren’t true. Pursuing her passion didn’t make her selfish. It didn’t mean she was damaged goods.

She’d find love again. Eventually. But tonight it wasn’t love she was after. She just wanted to think about something besides that brain-dead temp job at the newspaper, the skimpy dance tips she earned at the restaurant, and the studio that sank her deeper into debt every day, even if it was the only thing that could still make her smile.

She wanted to remember how it felt to be touched. To feel lips pressed to hers, hands on her waist, maybe a caress or two. All the belly dance writhing and grinding in the world wouldn’t scratch that itch.

She needed a man.

“Do you have someone in mind?” Melanie asked, distracted by the full-page photograph of a dragon tattoo she was holding beside her miniskirt-exposed thigh.

“No one in particular.” Abby smoothed a thick layer of smoky eye powder over her lids with her fingertip, then double-checked the crimson silk blooms and rustic Middle Eastern pendants pinned to the scarf knotted around her head, leaving her thick batch of braids, leather strands, and long pheasant feathers to hang freely over her shoulder. She tucked in a few extra hairpins, then turned around. “Maybe that guy at the window table who always slips me his phone number with his one-dollar tip.”

“Are you serious? He’s got to be ninety years old.”

Abby chuckled. “I know. I’m kidding. There’s never a shortage of flirts looking to score with the belly dancer, though. I usually ignore them, but tonight, who knows? Can you help me with my straps?”

Abby turned her bare back to her friend, who set aside her magazine to untie the halter’s plum-colored straps. She tugged them tighter.

“No. More.” Abby squeezed the sides of her top, which consisted of more old coins and cowrie shells than fabric, until cleavage filled the deep V of her neckline.

Melanie tied the knot, inspected the front, and nodded. “Nice,” she said. “The costume looks great with the tattoo.”

Abby’s fingers brushed the inked swoops and swirls that curved around her belly and disappeared beneath the waistband of the low-riding harem pants and all the belts, scarves, and tassels tied around her hips. The tattoo—a belated birthday gift from Melanie—was already two weeks old, but still sensitive to the touch. “It is nice, isn’t it? Tell your boyfriend he does good work.”

“No way,” Melanie said. “It would totally go to his head. He’s already impossible.”

A pounding on the door interrupted them. “Two minutes,” said a deep, accented voice.

“Okay, that’s my cue to leave,” Melanie said. “I’ve got to get on the road anyway if I’m going to get to Hollywood before the show. The 405 will be a parking lot if I don’t get moving.” She pulled out her key ring, detached one of the keys, and set it on the desk. “Thanks again for letting me get some practice in at the studio. I locked it up. Oh.”

Abby stopped dabbing at the color on her lips. She knew that tone.

Melanie pulled a folded piece of pink paper from her purse.” This was taped to the studio’s door when I got there.”

Abby took it. “Past Due: Warning” was stamped in thick black letters across the top. Her gut clenched. She wasn’t surprised, but that didn’t make it any easier. She pushed the paper into her bag. She wasn’t going to think about it tonight.

“Really?” Melanie asked, cautiously. “Because if it isn’t, if you need help—”

The last thing she needed was pity.

Two angry thumps on the door.

Abby looked into the mirror.

Zenina looked back. Part tribal belly dancer, part vaudeville chorine, part silent picture vixen. She had drawn from her favorite inspirations to create her performance persona. Her alter ego. Her dance self.

“I’m coming,” she hollered. This was it.

Three hundred and sixty-five frigging days. It was a long time. Too long.

“You can do this,” she whispered to her other self. “It’ll be just like any other performance.” Only better.

By the time she took her place on the small stage, the lights were low, and a slow, snaky melody had filled the restaurant’s main room. She was only a silhouette to the roomful of diners, holding her pose like a living statue. She usually closed her eyes during this prelude and focused on the energy of the music and the audience.

In the darkness, her gaze roamed. She wanted a good view before the stage lights came up to brighten her, and blind her.

Nearly every seat was filled. A good draw for a Thursday night. Mostly couples, some groups. But it was the single men she searched for. The ones who sat on the fringe to watch.

Would it be the college jock tipping back beer in a bottle? The shy guy in the Oxford shirt fidgeting with his soda straw? Maybe the older…

A Suit at the bar caught her eye. One hand wrapped around a highball glass, the other tugging at his tie. Calm. Confident. And sexy as hell. The way his gaze locked on her made her tingle in all the right places.

He was the one.