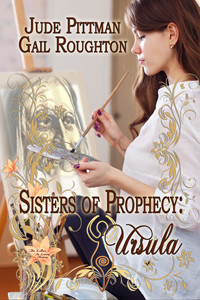 What’s a girl to do? Katherine Shipton has a painting that talks, an ancestor who won’t stay in her own century, and a former boyfriend with a serious ax to grind against her new fiancé. She already has a full plate, but when said ancestor sends her tripping back and forth between the 15th and 21st century without benefit of psychedelic drugs, the poor girl begins to doubt her own sanity. Then her best friend, a high fashion model with more than her own share of psychic energy, and her troubleshooting aunt show up on her doorstep in response to a psychic SOS Katherine swears she didn’t send. Life couldn’t get more complicated. At least, that’s what she thinks until her oilman fiancé disappears in the Gulf of Mexico and a DEA agent knocks on her door.