Sign UpLogin
You are here: Home / Books / The Criminal Streak 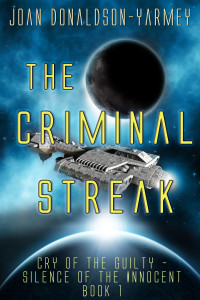 After two pieces of an asteroid hit their planet and knocked it off its axis, the surviving beings of the planet spent centuries rebuilding their society on the edge of disaster. The Leaders made Great Changes and Purges, constructing twenty huge cities, called megalopolises, to house their population, cultivating huge farms, and purging most of the technology so everyone had a job.

The one problem the Leaders can’t control is crime. They have banished first time criminals to the destroyed former cities, now called Fringes, beside the Megalopolises. The murderers and drug and tobacco sellers are being sent to Orbital Prisons. These are set inside former spaceships orbiting above the planet. But those prisons are being overwhelmed and there is now a quest to find another planet that would support their type of species.

Jawn has just been sent to the Fringe of Megalopolises One for theft. He is lost, scared, and easily robbed of his few belongings. He finds his brother and is given a quick lesson on the rules of living in the Fringe.

Gwin is an Exploratory Officer who is part of the mission that finds the planet suitable to be used for a penal colony.

Both Gwin and Jawn are among the prisoners on the space ships when they land on that planet.

Ten thousand years ago, our ancestors evolved from being hunter/gatherers to growing their own food. They also began inventing things to make their lives easier. This could be one explanation as to why.

Two asteroids collided out in space. Both were bumped out of their orbits and one broke into pieces. Two of those pieces soared towards an occupied planet. One hit land throwing a thick layer of dust into the air, and starting countless raging fires which consumed towns and cities. The other landed in an ocean creating massive tidal waves on most shores. The waves submerged islands and swamped half the land on the continents, drowning all people and animals in its path.

The dust formed a blanket and the plants on the land not hit by the waves died for lack of sunlight and moisture. The masses of inhabitants who survived the fires and tidal waves choked to death or died of starvation. When the water finally subsided it exposed the islands, now bare, and left huge lakes on the continents. It took months for the people living on the untouched areas of the planet to assess the destruction. One‑third of the planet’s former landmass was under water or covered by a dust mantle and half of the planet’s population had died.

During that time the true horror of the catastrophe done by the asteroids was revealed. The bump occurred when the planet was in its equinox and that was how it stayed. The middle section or equator permanently faced the sun as it rotated. Over the next few years the hotter rays burned off the ozone layer at the equator. The sun shone with a brilliant white light and the land for long distances on both sides of the equator could no longer support life.

Great bands of habitants trekked north and south looking for a new place to live. Fences, patrolled by armed guards, were erected around the towns and cities in their paths but they were hungry and angry and could not be stopped. Thousands were killed as they swarmed through the towns and cities, looting stores for food and water and clothing, and setting fires. But when that was over there was still no place for them to go and no food for them to eat and hundreds of thousands starved to death before tent cities could be set up and meagre rations of food distributed.

Fear, and the knowledge that this may be their only chance, drove all the countries of the planet to join as one large Global Alliance. Leaders worked together to find the best way to save their species. To the north and south, where the ozone layer was thicker, the weather was more temperate. The alliance decreed this land was to be used to grow grains, vegetables, and domesticated animals sufficient to feed the people.

In what became known as the Great Change, twenty mega cities known as Megalopolises were built on huge tracts of arid land close to the farmland. They consisted of levels dug into the ground and ones rising above ground. Once they were completed, all the people who weren’t farmers were moved to the cities where they were given jobs and provided with rent-free apartments until they could afford to buy.

The villages, towns, and cities were then demolished so the land could be turned into more farmland. Special forests were planted for the cultivation of medicinal plants as well as for the small percentage of air purification they provided. It took years for the farmers to kill the remaining plants and work the land for seeding. They went as high up the mountain sides as trees had been able to grow and claimed the edges of the deserts through irrigation. What was too rocky or had substandard soil was turned into feedlots or pasture for the animals. Any other species of animal not of direct benefit to the dominate race was exterminated.

Scientists developed new strains of grains and vegetables that grew faster and larger so that six crops could be planted in a year. Animals were fed growth hormones and were ready for market in half the normal time. Great fishing farms were set up in the oceans and lakes.

At the same time there were purges. The Leaders decreed that everyone must have a job. So began the Tech Purge. Technology that had been developed over hundreds of years, first to make life easier and then to increase company profits by eliminating the worker, was banned. Walled‑in industrial parks were erected beside each Megalopolis and any company that wanted to move there had to convert back to people power. Soon, the equipment that had taken over assembly lines, the apparatuses that had mixed and built, and the computers that had done the thinking were thrown into Tech Dumps. Residents ran the looms to make cloth, used the scissors to cut the patterns, made the garments. They worked in the assembly lines that built everything, they filled the ledgers, and they made the bread.

When a walkway in the megalopolises had to be repaired, the residents mixed the moon dust compound by hand and carried it in buckets to the repair site. When the streets needed sweeping, they were out in force with brooms. When a new level was to be constructed they carried the materials, mixed the moon dust, poured the bricks, and built the apartments. Everyone capable of working had a job and everyone earned enough to look after his or her needs. It was only where the lift and carry was too heavy for the workers or the distance of transport was too far, that limited machinery was used.

Some remnants, such as telephones for communication and television for in home entertainment, had been kept. Education, especially history, was encouraged.

During the Corruption Purge, it was decided that anyone who committed a crime was not to be tolerated. All first time convicted criminals, no matter what they had done, were sent to the Fringes, former cities near the megalopolises, for five years. What they did there was of no concern to the justice system, but if they were caught back in the giant cities during their term, their sentences were doubled and they were sent to the Orbital Prisons. Anyone in the Megalopolises who committed murder or sold drugs which included tobacco, was automatically jailed in the prisons. Those sentences ranged from ten years to life.

Present life was good. The population was growing slowly; the food supply increasing. The one drawback, though, was crime. It, too, was increasing and they were running out of room to house their prisoners.