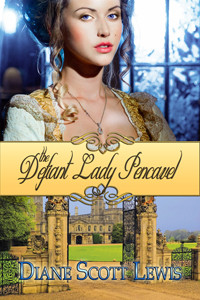 In 1796, Lady Melwyn Pencavel has been betrothed to Griffin Lambrick since she was a child—and she hasn’t seen him since. Now almost one and twenty, she defies being forced into an arranged marriage. She aspires to be an archeologist and travel to Italy during the upheaval of the Napoleonic Wars. Griffin Lambrick, Viscount of Merther, resents these forced nuptials as well, as he desires no simpering bride and wants no one in his business. For the thrill of it, he smuggles artifacts from Italy at his Cornish estate. Two reckless and stubborn people will meet—with chaos and humor—in this romantic satire, and face their fears.

Griffin Lambrick, the Viscount of Merther, strolled past the kitchen garden where spicy smells reminded him of when he’d romped here as a boy, pulling out plants to irritate cook. The air near the sea remained damp and he prayed for no storms to ruin his plans—though his plans were weeks from now and turbulent flaws could rise at any time.
He’d just left his tenants in the village he provided, giving them extra food from his gardens. When you took good care of your people, they remained loyal and worked hard for you—and aided and abetted when needed.
He entered his two-hundred-year-old Elizabethan manor, passed through the scullery, kitchens, the green baize door, out of the scent of food, and into the “genteel” portion of the house. His late mother would never have even considered setting one dainty toe in the kitchens. Griffin was certain his father would have been scandalized at the very idea. How utterly traditional and unimaginative his parents had been.
Griffin smiled in reminiscence with a dip of sadness—he did miss them and their often distracted, yet benign attention, as a dutiful son should—and entered his library. This room’s rich leather smell soothed his restless mind—for a time.
“I was just about to come find ’ee, sir.” Jacca, his bailiff, turned from a corner desk.
The Neoclassical piece by Maggiolini had been brought back from Italy by Griffin on his grand tour of the continent. The extensive inlay and marquetry of multiple rare woods over a walnut sub-structure had drawn him, as had a certain Italian beauty.
“What requires my immediate attention?” Griffin paced about the chamber where he’d spent untold hours reading the classics, when he wasn’t galloping on his favorite steed over his extensive acres. Or performing the hazardous undertakings that kept his ardor alive.
His chest heated—albeit briefly—at the uncomfortable fact that his parents would have been disappointed in him.
“Sir?” Jacca—with his long, glum face lined by well over forty years—had led Merther Manor since Griffin was a lad. The bailiff stepped fully into the light from a window, and continued, “A letter has—”
“Where did you get that bruised eye?” Griffin asked, taken aback by the purple discoloring around his bailiff’s right eye. “Bear baiting again? Betting at cock fights? Falling down drunk at the local kiddley?”
“’Tis nothing, sir.” Jacca shrugged and lowered his head. “Me missus planted me a facer for bein’ late for supper. An’ I was only five minutes tardy. But nothin’ pleases her no more.”
“You should really do something about that woman. The laws say you can correct your wife, but nothing about her correcting you,” Griffin admonished. Females should be kept firmly in their place or they tended to spiral out of control—though meek girls bored him, he must admit. That temperamental Italian mistress had kept his interests for nearly two years, then she’d demanded marriage. Aware he couldn’t wed such a lower-class woman, they’d parted amicably enough after monetary compensation. He’d never loved her. He doubted he was capable of such an emotion, except when it came to his family.
“What I was about to say is, a missive arrived for ’ee.” Jacca held out a sealed letter. “Looks important, it does.”
“How are my affairs? Soon I’ll be off to London to consult with my man of business and I want to be aware of any details I should be apprised of. Have the deplorable estate taxes risen again?” Griffin took the letter without glancing at it.
“Naw, sir.” His bailiff flipped open an account book. “An’ everythin’ runs smoothly at your properties, as always. The sheep produce well, the wool good an’ selling in West Riding at them new manufactories.”
“Ah, the manufactories. They’re putting the cottage industries out of business, people out of work and on parish relief.” Griffin leaned against his large desk, unbuttoned his frock coat, and slapped the ignored letter across his knee. “And the aristocracy, such as I, fund the parish relief, which is the least we can do.” He tapped the letter, still not looking at it. “I encourage progress, but it hurts the common people.”
“Ess, it does. As far as smooth running of affairs, our nocturnal dealin’s be an entire different matter.” Jacca winked his un-bruised eye, but it barely stirred his craggy features.
“My man of business is well-acquainted with our secret transactions, as you well know.” Griffin warmed at the idea of the risks he took. Danger kept life exhilarating. A reason to rise from bed each morning, especially now that the house was lonelier after his mother and father’s unfortunate accident at the manor chapel when an embossed ceiling beam had fallen on them during prayer three years past—and his younger brother’s death in the Austrian Netherlands the year before that. Griffin stiffened against the carved edge of the desk. He hated to dwell on such losses.
He sighed and glanced at the letter’s seal. A fancifully executed P was pressed into the red wax. He fought down a grimace.
Jacca watched him carefully. “You look a bit pale, if I may be so bold. Bad news?”
“I’m anticipating unwelcome, or if I could be hopeful, a refusal from this party on something agreed to many years ago.” Griffin broke the seal and read. His stomach sank as if he’d swallowed a lead ball. He’d put this arrangement into the recesses of his memory, and now it stared him in the face like a pregnant tavern wench accusing him of paternity. “Deuce it all. The Earl Pencavel is forcing my hand.”