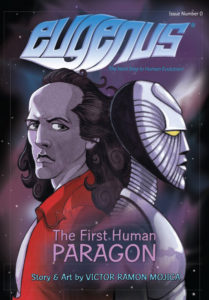 The First Human PARAGON is a return to the critically acclaimed comic book series eugenus® … The Next Step In Human Evolution! It ran from 1992 through 1994, along with 2 short stories: “TEMPTATION” and “AMOK”. The First Human PARAGON is released as Issue #0, a prequel to Issue #1 to be a PARAGON. The stories of the eugenus® series are meant to inspire us to be better human beings and to foster pride in our human nature. In this current story, The First Human PARAGON, as in all stories based on the eugenus® Universe, Mankind has become “one in race, government even in creed”, but continues to struggle with his nature and the ever changing world around him.