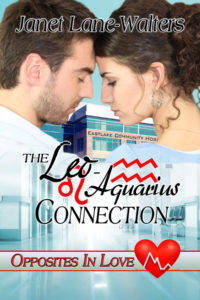 The nurses stare as he exits the elevator on the Pediatric Unit. “Enter the handsome doctor.” Those are Doctor Caleb Winstone’s words as he steps off the elevator. Though he’s embarrassed, this Leo doctor rolls with the punches.

He’s returned home to join an older doctor in the practice. Before long he learns the new nurse manager of the unit is a woman he knows. Of all the women in the world, she is the last one he wants to see. How can he manage to work daily with her? Before the day ends, he discovers his mother has decided who he should marry and the woman is quite willing. Not for him.

Suzanna Rollins is an Aquarian and now the guardian of her half-brother who was badly injured in a car accident. She takes the position as nurse manager of the Pediatric unit for several reasons. One is the move from the city re-unites her with college friends, the Grantley Gang. The other is for the excellent Rehab Center. On the day of her arrival, she encounters Caleb. What is he doing here and why? Can she work with the man she fell in and out of love with the night he offered her less than marriage?

Caleb’s interest in helping her half-brother gives them more together time than they imagined.