Sign UpLogin
You are here: Home / Books / The Lost Civilization 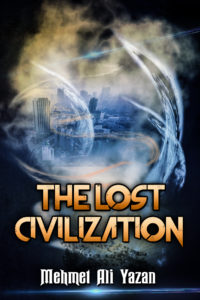 A two-in-one mission – a mining expedition to a newly discovered asteroid Andorra 85, and the exploration of Mars – leads to the discovery of an ancient civilization. Soon, the contact with the friendly Agarta-Nibiru is made, and for the first time in the history of humankind, astronauts visit the planet of Nibiru… Only to find out that the Third World War, a nuclear war, is about to start on Earth, and that a technologically superior enemy, Von Civilization, will soon attack both Earth and Nibiru.

While the Agarta-Nibiru are more than willing to help their new allies, they are running out of time. Will the humans finally manage to destroy themselves, or will the Von Civilization do it? Or maybe, just maybe, will the wise Agarta-Nibiru find a way to save them all, and start a new era of peace and prosperity?

The discovery of the lost civilization begins. The humankind faces its greatest challenge, but we’re not alone in this. For better or for worse, we’re not alone.