Sign UpLogin
You are here: Home / Books / The Pits 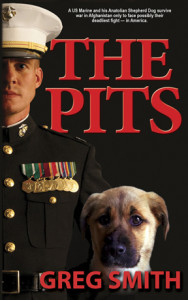 After nearly 20 years serving in the Marine Corps, Captain Kramer thought he’d been prepared for anything life had to throw him. He returns from deployment to Afghanistan with a new dog, Shadow. Back in Oceanside, California he and Shadow are drawn into a struggle to oust local gangs involved in a bloody sport. Kramer and Shadow’s activities capture the attention of the FBI who quickly enlist their help in an operation to bring down a major crime lord based in Florida. Captain Kramer, USMC and Corporal Shadow, USMC soon find themselves in their deadliest fight ever.

The mid-summer sun hammered mercilessly on the anvil of the Afghan countryside and the town of Gereshk. Thick and still, the air stifled those not acclimatized to the savage, unforgiving region. To the local inhabitants, the day was no different to any other. They sought distraction from their tedious life anywhere they could find it. To the fifty or more cheering men it meant their regular dogfighting event. Street dogs constituted the hapless combatants that fought for their lives. A few came from distant townships, the dogs’ owners all the same, eager to make some fast, easy money.

A dry wadi on the outskirts of Gereshk formed the fight pit, the crumbling dirt banks of the gully serving as vantage points for many of the clamoring spectators. Dust rose in a fine, gritty cloud around two dogs currently engaged in a fight to the death. Their owners and the throng goaded them to ravage each other, and the dogs obliged by ripping and tearing into one another. The last fight of the day reached its bloody conclusion while close by, beyond the outer edge of the mob, lay the torn and bloody bodies of two dozen dogs, the losers of previous bouts and the battered winners left alone to lick their vicious wounds.

A passing Humvee pulled to the roadside, and the U.S. Marines aboard alighted to check on the source of the action. Captain Kramer noticed the pile of dead canine bodies and realized the cause of the fuss, another bloody dogfight. For the band of warriors, they’d witnessed many similar sickening events since arriving in-country. This brutal sport was common and widespread throughout Afghanistan and the Middle East, throughout the world, in fact. Even at home in their beloved United States of America.

Thoroughly disgusted, the Americans mounted their Humvee and skittered onto the road that ran pass the Forward Operating Base, Delaram II.

“When I get outta this damn hell-hole and plant my feet on good ol’ American soil again, I’m gonna make it my business to somethin’ about that fuckin’ sport. If I so much as lay an eye on anyone hurtin’ a dog like that, I’m gonna skin the fucker alive and feed his balls to his own dogs.” The grunt spoke to no one in particular.

“Oorah!” his squad chorused in unison.

Captain Kramer fixed his eyes on the ribbon of road ahead. He wholeheartedly agreed with his trooper. Dogfighting was definitely another aspect of this war that he could do without.