Sign UpLogin
You are here: Home / Books / The Shore Thing 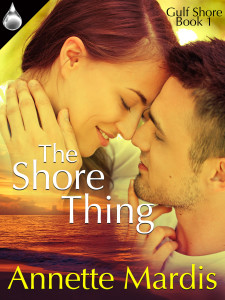 Danielle “Dani” Davidson vows to just say no to workplace romances after her first post-college job is soured by a messy breakup with a manipulative coworker. That’s just one reason she doesn’t trust any man with her heart, let alone one who swims with sharks for a living. So why can’t she get Evan Sanders out of her mind?

Evan is twice shy, too, after an alluring but self-absorbed colleague takes a bite out of his heart. Though he’s dead set against dating anyone else he works with, he’s still intrigued by Dani’s intelligence, shyness, and low-key sexiness.

Their attraction smolders until an unfortunate encounter with a stingray sends Dani to the emergency room and Evan steps up to help her through her recovery. The two also bond over the rescue of an orphaned baby dolphin. But will Evan’s vindictive ex-lover, his career ambitions, and Dani’s inhibitions tear the young lovers apart?