Sign UpLogin
You are here: Home / Books / The Yankees Had Something To Do With It

The Yankees Had Something To Do With It 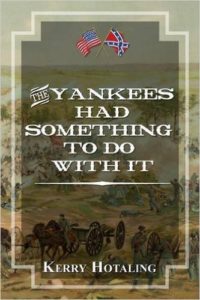 “The Yankees Had Something to do with it” is a quote attributed to General George Pickett when asked after the Civil War why the Confederate Army was defeated at the Battle of Gettysburg.

This book brings the reader onto the battlefield and into the strategy sessions during the Gettysburg Campaign from the viewpoint of several Union generals that “had something to do with it”.

Experience the campaign as it unfolded for these men. General Hancock, General Warren and General Meade are a few of the characters who bring the exciting story of Gettysburg to life.

General Gibbon rode with his aide Lt. Frank Haskell to Second Corps headquarters, which was on the easterly slope of Cemetery Ridge. The cannonade had ceased and all was quiet. He wanted to be at headquarters for information. If orders were issued to division commanders, he could then disperse them quickly to his brigade commanders.  He sensed something big was about to transpire.  A two-hour cannonade would not be wasted.  it was a prelude to some attack.  He thought of Meade’s words last night; ‘If Lee attacks tomorrow it will be on your front’.  Gibbon still felt confident his men would repulse any assault.  The ground on his front was not conducive for an assault.  It was a mile of open fields, bordered by sturdy wood fences.  Artillery fire would decimate ranks of any advance.  If Meade thought they would come, well, let them come, for General John Gibbon and his division would be ready.

When they got to headquarters, they were informed that General Hancock was out riding the lines amongst his troops.  Typical, thought Gibbon.  Hancock was not one to lead from the rear.  Gibbon looked down the line.  The smoke was rising and the air was clearing, but the smell of gunpowder and sulfur was still strong in his nostrils.  After two hours the scent would not recede.

He heard yelling from the west side of the ridge.  It was coming from the position of his troops.  He turned to Haskell and said, “Let’s go see what’s going on.”

They rode to the crest of the ridge.  The yelling was now taking the shape of words, which soon became sentences.  “Here they come.” “Here come the Johnnies”.  Gibbon looked westerly across the fields and was stunned.  Confederate infantry was stretched out to the north and south as far as he could see.  He took out his field glasses and put them to his eyes.  Skirmishers were advancing in front of every regiment.  Behind them came their regimental battle flags, waving in the wind.  These flags were followed by infantry formed in one line of battle, then a second, and then a third.  Gibbon felt his heart pounding in his chest as he watched the enemy move steadily forward along his front.  He estimated they were advancing with 18,000 troops.

He turned to Haskell and said, “Look at that, the sons of bitches are coming.  Meade was right”.

“Magnificent display,” replied Haskell.  “Too bad we have to ruin it.”

A soldier on the line yelled, “Sir, should we be ready for kingdom come, or Libby prison?”

“Neither,” said Gibbon.  “Today we give them Fredericksburg!”

A cheer went up from those that heard him.