Sign UpLogin
You are here: Home / Books / To Have and To Hold

To Have and To Hold 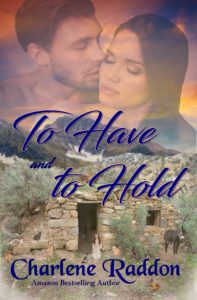 A woman without a prayer…

A widow with two children, Tempest Whitney had to mortgage everything to repay the money her husband had stolen. But even as she struggles to hold onto her Utah homestead, a scheming rancher buys up her debts, demanding she either get off his land or marry him. Then a dark-haired stranger shows up, claiming to be her dead husband…

A man without a past….

Buck Maddux spent two years in jail for a crime he didn’t commit. Now a death bed promise has brought him to Tempest’s dugout. A man without roots, he doesn’t plan to stay—or to feel so fiercely protective of this feisty beauty he saves from a forced marriage. Suddenly, Buck yearns for a home, a family, a lasting love. But what can he offer Tempest? The surprising answer lies in the forbidden canyons of an ancient Anasazi tribe, where fortune and danger await—along with a passion more precious than gold…