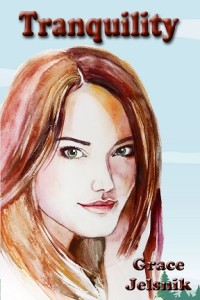 The locals called her “The Crazy Woman of Copper Creek,” but to Caitlyn she was Gram, the woman who taught her to control the visions that had tormented her throughout her early childhood. When Gram is murdered, Caitlyn is determined to bring her murderer to justice, with or without the assistance of the local sheriff. She and Trevor are at loggerheads from the moment of their first meeting and must set aside their mutual animosity to put an end to the rash of deaths plaguing Lincoln County.

Trevor parked in front of the cabin and, after surveying the property, climbed out.  So this was the crazy woman’s place.  It didn’t strike him as all that odd.  It was pastoral, more a retreat than a place to hide.  He’d have something like this one day, bigger and constructed from lumber, not logs, but possessing the same peaceful setting.

He wouldn’t kill to have it, though, so the motive for the old woman’s murder wasn’t likely to be financial.  He saw evidence of hard work here, not money.

The front door of the cabin was open, a yawning black hole with a slice of redwood door visible in its depths.  He walked over and poked his head in.  “Hello?”  He waited, but no one responded.  The granddaughter was gone.  A car was there, a small blue Toyota.  Walking back to his vehicle, he radioed in for registration while watching the chickens scratch along the garden rows.  Maybe he’d have chickens.  Splashes of red amidst the green caught his attention.  The tomatoes were starting to ripen.  He liked garden-fresh tomatoes.

The radio squawked with vehicle registration information.  “I copy that, Lucy.  Out.”  The car was registered to the granddaughter, Caitlyn Blanchard.  He frowned and took off his Stetson, swiping the back of his sleeve across his forehead.  The late June heat beat down on his head, and he replaced the hat before calling out, “Ms. Blanchard!”

A minute later, he heard sounds of rapid passage in the forest behind the cabin, to his right, and a second later a dog erupted from that side, galloping to him, sliding to a stop on its haunches, and grinning up at him.  Trevor’s brows shot up.  That was a Catahoula Leopard Dog if he’d ever seen one, an uncommon breed for these parts.  This one appeared to be a purebred, an attractive one, too.  While bending over to scratch behind the dog’s ears, Trevor wondered how an old woman had been able to afford a purebred like this.

He might have to revise his opinion about motive.  There was money here.  A person just had to look hard enough to see it.  He wondered who stood to inherit.

Maybe the dog belonged to the granddaughter.  “Where’s your owner?”

The dog widened his grin and flopped to the ground, rolling over to expose his belly.  “That’s not the way a confidential informant works, boy.  I scratch your ears, you reciprocate by telling me where your owner is.  I don’t scratch your ears and then your belly.  Quid pro quo, pal.”

Trevor decided to inspect the woods from which the dog had originated, skirting the fence beside the chicken coop and chancing upon a well-worn path.  The dog raced past him, the long greyhound-like body low to the ground.  “That’s more like it,” Trevor said with a satisfied nod.  “If this information pans out, you might just get that belly scratch later.”

He followed the dog along the path, winding his way around boulders and stepping over fallen trees until a flicker of motion ahead caught his attention.  When he rounded the next corner, he saw a slender figure scrambling up a massive boulder overlooking the falls.  A woman, her long gleaming chocolate hair tied back in a pink satin ribbon, perched atop the boulder, her arms raised high.

My God, she was going to jump.

Trevor reached her in three long strides and, placing a hand of each side of her waist, dragged her down.  She fought him like a tigress, squirming furiously while trying to bite him, until he damned near dropped her.  When he set her on the path, she whirled on him, plowing a small fist into his mid-section.  He hadn’t been ready.  He doubled over when the air left his lungs in one big whoosh, but he saw the next fist coming and caught it with one hand.

Caitlyn received a single, revolting image, and stepped back a pace in disgust.  “Catsup on French toast?”  She saw his eyes widen, a little, and then crinkle with amusement.

“I suppose you use syrup or powdered sugar.”

“Preserves.  What in the hell are you thinking, running around these parts and grabbing women from behind?”

She shot him a skeptical glance.  “I don’t see a badge.”

He plucked it from a jeans pocket and flashed it at her.  “I don’t generally have occasion to use it.”

“Or you keep it secreted when conducting illegal acts.”

She was starting to tick him off.  Here he’d prevented a suicide attempt, and she berated him for the manner in which he accomplished it.  “You’re welcome.”

“Welcome?  I’m supposed to thank you for manhandling me?  You’ve got a strange notion of chivalry.”  She turned away and began to clamber back up the rock.

“Don’t do it!” he yelled, moving toward her.

She paused and looked back at him, confusion written large across her face.  “Don’t do what?”

“Why would I want to jump?”  The confused look altered into one of disbelief.

“Wasn’t that what you were going to do?”

“Hell no.”  She stabbed a finger at a hole high in the tree beside the boulder.  “There’s a nest in there.  Can’t you hear the fledglings crying?  Their mama died.”

For the first time, Trevor heard the cries of baby birds.  He felt a flush creep up his neck.  “In the hole?”

“In the hole,” she snapped.

Mistrust flitted across the face.  “Why?”

“I don’t want to state the obvious, but I’m taller.”

“And I’m better looking.  That doesn’t qualify me any more to be sheriff than superior height qualifies you to pluck a nest from a tree.  To lift it out, you’ve got to get your hands under it and gently dislodge the nest without crushing it.”  She directed a pointed look at one of his large hands.

“Despite my butt-ugliness, I’m held to be as graceful as the next person.  Let me try.”

She considered him for a moment and then shrugged her shoulders and scrambled back down the boulder.  “Be my guest.  It’s on your head if any of them fall out and die.”

He thought it telling that she expressed no qualms about him taking a header off the boulder and plummeting to his death below.  He had the feeling she would deem that a minor inconvenience, a mere setback in her plan to rescue baby birds.  Bracing his hands on top of the boulder, Trevor hoisted himself up, dragged his knees beneath him, and rose to his feet.  Cowboy boots, with their slick soles, might not have been his best choice in footwear for this visit, but he hadn’t expected a wilderness trek.  He glanced down at the foaming water at the base of the falls beneath him and grimaced before turning his sights on the hole.  “I’ve saved any number of lives,” he called out while reaching for the nest.

“And probably lost more, wasting time while you boasted about it.”

Trevor grinned.  She had an acid tongue, but he appreciated the rapidity of the retort.  He extricated the nest with great care, cupping it between his palms during his descent.  Halfway down, one boot lost its traction.  He couldn’t use his hands to regain his balance, so he raced down the boulder, his eyes wide.  As he went past, the woman deftly plucked the nest from his hands, and, arms pinwheeling, his forward motion bore him into the side of a tree.  He hit it solidly and slid to the ground, sliding his arms around the trunk and resting the side of his face against the rough bark until the initial wave of pain began to ebb.

She walked past him and down the path, her head bent low over the fledglings.  “Don’t get too friendly with that tree.  There might be children out here.”

He stiffened when it occurred to him that it must look like he was hugging the tree, not an especially politic move for a sheriff in a logging community.  Grabbing a sagging bough, he dragged himself to his feet, rubbing the forehead he’d probably shattered during the encounter.  “Damn.  That hurt.”

“Imagine how they feel.  You lost your balance.  They lost a mother.”  She heard rustling behind her and then the sound of rapid footfalls, but she didn’t look back.  All she had to fear from this one was culinary idiosyncrasies.

Trevor studied her straight back while he followed her down the path.  He liked the way the long ponytail swayed a little with each stride, the rich brown fall of hair radiating hints of fire whenever kissed by a stray ray of golden sun through the tree canopy above.  The pink satin ribbon loosely binding it at the nape of her neck seemed at odds with the billowing royal blue T-shirt tucked into faded blue jeans.  He did like the way those blue jeans fit and the way the hips had a slight sashay to them, probably caused by the nest she bore before her.

He thought back to the face she’d turned on him right before she punched him.  She had what he’d heard his mother call the kind of face that defied aging: good bone structure beneath the evident traces of strain.  Her eyes, a smoky green fringed with sooty lashes, were wide set and clear beneath naturally curved black eyebrows.  Her nose?  He thought about it and decided you’d call it pert.  Not a snub, but straight and narrow above full lips, wide and generous, a dusky rose.  Her chin may be a tad too strong, he decided, never a good sign in a woman, and he wondered what her life had held to put that worry line between her eyes.

Now that he thought about it, she wasn’t much to look at.  “You’re not all that good looking, you know.”

Caitlyn stopped, looked back, and frowned.  “As a conversation opener designed to bridge the silence between us, that one’s a non-starter.”  She turned away and resumed her passage.

“What do my looks, or the lack thereof, have to do with anything?”

“You said you were better looking.  I’m not seeing it.”

She stopped again and faced him, scorn pronounced in the green eyes.  “Well, you wouldn’t, now, would you?  You’d need to look in your mirror, not my face, to make the comparison.”  She turned her back on him—which was fine with him—and increased her pace down the path toward the cabin.

Trevor followed at a slower pace, a grin tugging at the corner of his lips.  She was quick; he’d give her that.