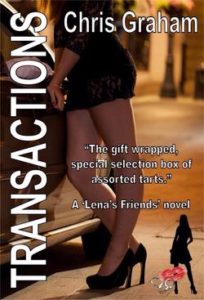 TRANSACTIONS is the first full length novel, in CHRIS GRAHAM’S, ‘LENA’S FRIENDS’ series of crime stories.
Two middle class schoolgirls, working as prostitutes, provide the thread that ties together the lives of various characters around the city of Bristol, along with the crimes that some of them are involved in both at home and abroad.

Forced off the streets, supposedly for their own good, they become the playthings of rich businessmen, each with their differing agendas.

When trafficked young women are discovered hidden in the back of a truck, one of these men becomes worried.

Meanwhile the police have a suspect who knows less than he thinks he knows… but, in his possession, he does have knowledge that puts himself in grave danger.

Unaware of all this, the two girls continue to ply their trade, as connections with Africa and with businesses in France are revealed. Diamonds and gold are being smuggled, and there is now a risk that the operation may be discovered.

Now somebody must die.

TRANSACTIONS is available as e-book (Kindle or .pdf *) and paperback editions.
*.pdf version only available from the publisher’s website (www.ex-l-ence.com)