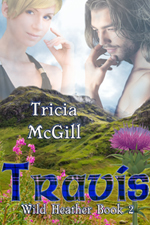 Beth Anderson travels to Scotland to help her Australian friends, Liz and Andrew, renovate the dilapidated castle he inherited from his uncle. Beth shares Liz’s passion for all things Celtic and knows the ancient language well. Liz tells her an unbelievable story of how she and Andrew were swept back in time to 1050, to a hostile world, where Andrew saved the life of Travis, his ancestor, a lovable rogue.

Beth decides to explore the castle attics and unwittingly discovers their method of time-travel. But the Travis she meets is a changed man, now driven by revenge and set on annihilating all his enemies. He has too much violence and bloodshed to contend with and has no time in his life for another woman from the future. Despite this a great love grows, a love that must overcome many obstacles before reaching its conclusion. In Book 1, The Laird, we met Travis, his family, and his clansmen, in Book 2 Travis, we are reunited with them.