Sign UpLogin
You are here: Home / Books / Whatever Happened to Virginia Dare

Whatever Happened to Virginia Dare 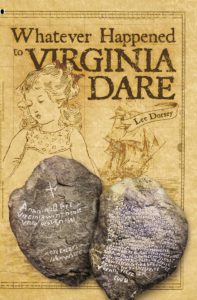 A Search for the Lost Colony

In 1585, Sir Walter Raleigh took on one of the first English settlement attempts in North America. The first trip was to establish and locate an area suitable to set up a colony. A year later in 1586, he set up a colony of about 100 men on the east coast of North America on land he named Virginia, in honor of Queen Elizabeth I, who being unmarried was known as the “Virgin Queen.” The first attempt to colonize failed after a few months. Then in 1587, Raleigh made another attempt at establishing a colony at Roanoke Island, Virginia with a 117 men, women, and children. When it was discovered that additional supplies were needed to sustain the colony, the leader of the colony, John White, left the colonist, his daughter, and granddaughter, Virginia Dare, on Roanoke Island.  He promised to return quickly with the needed supplies. A war with Spain interfered with his return. Finally, when White and the supply ships arrived in 1590, the entire colony had disappeared, except for the word “Croatan” inscribed on a post. This novel attempts to resolve the mystery of the “Lost Colony” and learn the fate of Virginia Dare.

I would like to thank Professor Philip S. McMullan, Jr. Who shared his in-depth knowledge and research on “The Lost Colony?” And Deborah Thompson & David Morrison, Brenau University

For allowing me access to the Elinor Dare Stone

‘Whatever Happened to Virginia Dare’ is a novel about the early history of the English attempting a first American settlement in the 16th century.  The reader has to remember that the following pages are based on many facts as they are known and an exercise of my imagination. In other words, much of what you’ll read here actually happened according to the historical records and some of it did not. This novel was not written as a historical thesis, but rather to entertain the reader. I hope that you enjoy reading this story as much as I did in writing it.

On the morning of April 27, 1584, two clinker-built ships owned by Sir Walter Raleigh—the Ark Royal and the Mary Spark—were anchored in the Portsmouth Harbor. The morning air was softly depositing spring pollen across the ships’ decks as the water lapped against their sides from the incoming tide. The ships were fully loaded with supplies, ammunition, and a complete complement of crewmembers. The previous night, a company of soldiers were divided between both vessels and bedded down for the night.

The crew had been up early to prepare the ships for leaving with the afternoon outgoing tide. Everyone aboard was anxious to get underway. Their mission was to intercept a Spanish galleon that had been reported by British intelligence leaving Santo Domingo two days hence. According to the report, the ship was loaded down with gold and jewels, a port in Spain its destination.

The captains of the Ark Royal (Philip Amadas) and the Mary Stark (Arthur Barlowe) had been given permission by Queen Elizabeth to intercept this Spanish galleon and sail it back to England along with the contraband. The Queen had indicated that ten percent of the spoils would be divided among the crew and each captain would receive three percent for their trouble. Sir Walter Raleigh would receive five percent and the Crown would reimburse Raleigh for any damages that the ships might receive during the anticipated sea battle. Everyone aboard both ships was happy and agreeable with the arrangement.

Around two hours after dawn, as Captain Amadas sat at his desk studying charts of the Atlantic Ocean, a knock was heard at the door.

Without looking up from the charts that he was studying, he said in a loud voice, “Enter!”

The cabin door opened and his first mate, Thomas Berns, said, “Captain, Mr. Barlowe and several gentlemen have come alongside in a jolly boat and are proceeding to come aboard, sir.”

“Thank you, Mr. Berns. Have our visitors come directly to my cabin.”

The first mate left and proceeded back on deck. Amadas began to roll up the charts that he had been studying and within several seconds a knock was heard again at the door.

“Enter, please!” Captain Amadas said. He stood up from behind his desk to greet the visitors.

The first to enter was Captain Arthur Barlowe, followed by three distinguished gentlemen.

“Captain Barlowe, please do the introductions,” Amadas said as he extended his hand in a welcoming gesture.

“I would like to introduce you to Simon Fernandez, who is a chief pilot by trade.”

Barlowe turned to John White and said, “John is a famous artist who has traveled with the Queen’s Navy around the known world and has sketched wonderful pictures of foreign lands. John is scheduled to sail with Richard Granville’s ship to America in a few months to make maps and explore the coastline.”

White responded, “Thank you sir for the compliment.”

“And this is Thomas Harriot,” Barlowe said. “Mr. Harriot is a resident mathematician and intellectual at the Queen’s court.”

Barlowe slightly paused, and with some hesitation said, “I have received a direct order from Sir Humphrey Gilbert on behalf of Sir Walter Raleigh, who has been given a six year charter from the Queen, to immediately explore and settle, on her behalf, unclaimed portions of North America and to convert the natives to the Protestant faith.”

He took another pause before he said, “We have been directed to take on this mission in the name of the Queen. Unfortunately, we are not going to intercept the Spanish galleon, but we’re to sail directly west to the North American coast and survey it for the possibility of establishing a colony. Richard Grenville’s ship will be following us in a month or so with metallurgists and explorers to determine the location of valuable metals. The Queen has indicated in this document that she will handsomely reward the crews and officers of both ships when they return to England in a year’s time.”

Barlowe set the document down and Amadas looked at the desk as if to collect his thoughts. After a few moments, “I can’t say that I’m not disappointed. However, if Sir Walter wishes that we change the mission and the Queen has commanded it, we will do our duty.”

Barlowe spoke next. “Mr. Fernandez will remain behind after we leave and he’ll go over the charts with you to plot our course to America. He has extensive experience sailing with Francis Drake along the coast of America, and has some good information as to where in America would be a good location to begin a colony.”

Amadas picked up the charts he had been previously studying and handed them to Fernandez, who unfurled the charts on the desk and began to study them.

Barlowe said that he would escort Harriot back to his ship and settle him into quarters. “Captain, you will be the lead ship with Mr. Fernandez plotting our course. Please make arrangements to place him into some comfortable quarters when he finishes his work with you,” Barlowe said.

Amadas nodded his head in a positive direction. Barlowe, White, and Harriot bowed their heads to Amadas as they turned and left the cabin.

Once Barlowe and company left, Amadas turned to Fernandez and said, “If you’ll excuse me sir, I want to muster the crew on deck and inform them of the change in the mission.”

Fernandez looked up from the charts that he had been briefly studying and nodded his head in agreement.

Amadas left the cabin and walked up onto the deck. He stepped up onto the deck at the rear of the ship and called to his first mate, “Mr. Berns! Call the crew to assemble on deck; I have some important information to relay.”

Mr. Berns moved about the ship and rounded up the crew and the contingency of soldiers who had arrived the night before. Within minutes the entire ships company were looking up at Captain Amadas, anticipating his words.

For a moment the Captain stood looking down at the eager faces staring up at him.

“Gentlemen, most of you have served with me for the last two years. The mission we had planned to embark on today was to intercept the Spanish galleon that was reported to leave the harbor at Santo Domingo. It was also reported that she was loaded down with jewels and gold and the take would have resulted in big rewards for all of us.”

He took a slight pause. “I was informed a few minutes ago that that mission has been cancelled.”

There was a low moan throughout the crew.

“The Queen has directed us on an even more important mission that is in the best interest of the country and Crown. We have been ordered to sail for America and lay the ground work for an English colony.”

Another slight moan went up among the crew when they heard these last words from the Captain.

“I know that you are all disappointed with this change of mission, but we have our orders and to the man I expect you to carry them out. The Queen has assured me that we will be generously rewarded for our work.”

Amadas took another pause and smiled. “Men, once our work has been completed in America, I will take some time to intercept any Spanish caravels that we may encounter on their route to Spain.”

The gathered crew cheered.   “That’s all I have to say. Now, get back to your duties and prepare the ship to leave with the tide. Thank you for your understanding and attention.” Amadas stepped down from the upper deck and walked back into the cabin.

As Amadas opened the cabin door Fernandez looked up from the chart that he was studying. “Captain, come in please. I want to briefly go over the route to America that I am going to recommend.”

Amadas moved to the other side of the desk and addressed his attention on the chart.

Fernandez pointed to an area in the middle of the chart and said, “That is the island of Sao Miguel, and on this side of that island is Porta Delgada. Although this island is under the ownership of the Portuguese, they are very receptive to any business that comes their way. I would suggest that we spend a few days there; we can resupply and it will give the crew time to relax. Once we leave that port, it is more than fifteen hundred miles to the coast of America. As you know, once we reach our destination, the work that the crew will undertake will be strenuous as well as dangerous. Although it’s been my experience sailing the American coast with Francis Drake, the natives appear to be friendly, but we have to remember they are savages and can change without any provocation.”

Amadas took a moment and studied the chart. He turned to Fernandez and said, “Sir, once we leave port and sail into the ocean, I will turn over the ship to you for navigational purposes. Now sir, I will have my first mate show you to your quarters. We will be leaving anchorage in two hours. I will call you when we are about to enter the Atlantic Ocean.”

Fernandez extended his hand to Amadas and they shook in friendship. Amadas called to Mr. Berns. Almost immediately, Berns entered the cabin.

Berns opened the door and allowed Fernandez to pass and leave the cabin as he followed. Amadas sat down behind the desk and studied the chart and Fernandez’s markings.