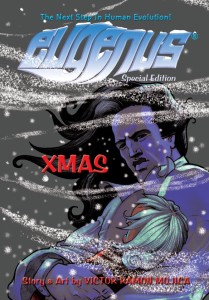 There was once a time when Christmas was celebrated with much joy and commotion. In the 31st Century, however, it will be celebrated no more. Mankind will become singular in ritual and belief, as with all things.

Humanity stopped waiting for divine intervention. They stopped wishing for a utopia and instead built one themselves. In the story XMAS you will glimpse a moment into this world. It is an age when Mankind walks a pristine Earth, both as its custodian and as its master.