Sign UpLogin
You are here: Home / Books / A Call Through Time

A Call Through Time 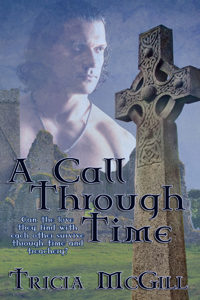 During one of these dreams Bart wakes up miles from his comfortable existence and in the year 450AD. When he comes face to face with Haesal, he knows instantly this is the woman who has shared so many of his heated fantasies.

Most Celts have fled west to escape invaders from over the seas. Haesal and her brother have been captured by an evil barbarian and Bart comes to realise that his mission is to rescue them and return them safely to their home in Cornwall. Haesal’s belief in shapeshifters and the fairy folk helps her better understand the sudden appearance of this handsome stranger in her life who claims to have a deep knowledge of her. But can the love they find with each other survive through time and treachery?

Haesal was more composed since her change of clothing. Her over-tunic, with sleeves and hemline edged with fur was her favorite, as was her shift that matched the sky on a warm, cloudless day.

In some ways, the stranger reminded her of her father. He certainly possessed the strength of character she admired most about her parent. Still, the odd pull inside continued to bother her. Certainly the great power of Brys seemed to enable him to accomplish great feats. But the fear she felt whenever near him was nothing to do with this strength or odd power. He defeated her worst enemy and for that she must give him her everlasting allegiance. Did her father not teach her allies deserve the greatest respect?

At a tap on the door, she glanced to Rhoda. “Stay while he eats, and do not leave until I ask you to go.” Rhoda bobbed her head, and went to let the stranger in.

As he came towards her, it surprised Haesal once more that a man with such a powerful body could move so smoothly and remind her of a wild creature. When he stood by her pallet, she felt tiny with him so far above her. She hid her shaking hands beneath a fold in the cloth in her lap, striving to keep her mouth from trembling.

Against the light of the torch he looked massive, and dangerous. His black hair glistened with moisture, and as a swath of it fell over his forehead he pushed it back carelessly.

“I trust you had a good bath. I see you received the garments I sent.” Why had her voice come out so soft? She jutted her chin. What was it about him that made her behave like a girl? She was brought up to rule the household, was she not, and had given orders to men most of her life. But then, this was no ordinary man.

“As you see I’m quite refreshed.” Brys spread his arms wide as he sent her a smile aimed at giving her reassurance. The icy dip in the long concrete pool of the bathhouse was invigorating. On his way back here, dressed in fresh clothes, he’d rubbed a hand over the stubble on his chin. In his haste to get back to her he didn’t feel inclined to press anyone for a razor of some sort. The men here possessed beards of varying lengths, so it was likely they didn’t have the necessary tools for shaving. Mother would have a fit if he even considered the notion of growing a beard. The idea of throwing convention to the winds and letting whiskers grow, appealed to him.

The thought of his mother caught him unawares. Was he missed in his other life yet? What if he was trapped in this time warp forever? There was little else to do but take whatever fate held in store for him.

The girl Rhoda crouched in a corner. Haesal might be grateful he rescued her from a fate worse than death, but it was plain he needed to prove himself before she’d be willing to trust him completely.

Haesal now wore a fur-trimmed tunic, its sleeves embroidered with gold thread. Around her waist a girdle of leather was fastened at the front by a wide buckle that looked to be silver. A huge amber crystal sat in its middle. An egg-shaped garnet drop nestled between her breasts. There was no doubt now that she was a woman of high station.

Two dishes of food sat on a low table nearby. She pointed to them, saying, “This is the best my women could produce at such short notice. Come, sit and eat.” Glancing about, she patted the animal pelt she sat on. There was no other seating in the sparsely furnished room, for which he was grateful. Brys knew she would never have allowed him to sit so close had there been a choice.

As he lowered himself beside her, his thigh touching hers, she flinched, and under the pretense of handing him the platters, shifted to put a space between them. He decided to ignore her wariness, even if he devoutly wanted to reassure her he wasn’t about to jump on her.