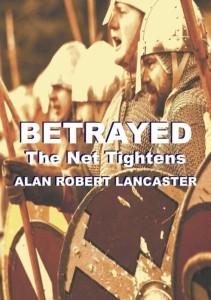 ithThe priest Eadwig tries to betray Godwin and his kin to King William, when they leave besieged Exeter at night with Ivar and his friends, overland to Barnstaple. Ivar next takes ship with Godwin, Eadmund and Magnus to Dublin. As with Harold many years earlier, Ivar asks King Diarmuid on Godwin’s behalf  for men and ships to harry the Normans and win over the West Countrymen.

With Dublin Danish leaders Ketilbeorn and Thored they raid near Bristol but are fought off by the fyrd. Again at Barnstaple Thegn Aelfred’s fyrdmen take them on, killing Thored amongst many Danes. Ivar takes badly wounded Magnus to Bosham after another abortive raid, leaving soon with Saeward and Hemming for Wales and the North, where they meet Eirik and Theodolf near Chester.

Further, at Jorvik with Osgod and Harding and their fyrdmen they sack the Normans’ new wooden stronghold, eject the shire reeve William Malet and take his castellan hostage.

This is Ivar’s fourth adventure in the RAVENFEAST saga, following on from OUTCAST. The next in the series will be WAYFARER. See developments on Alan’s web site: www. northworldsagasite.webeden.co.uk., and on his Hub sub-domain http://alancaster149.hubpages.com/hub/THE-RAVENFEAST-SAGA-SERIES.