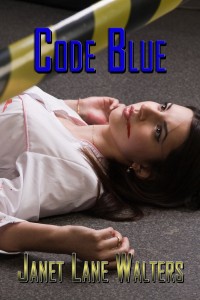 In the medical suspense Code Blue by Janet Lane Walters, published by Books We Love and previously published as Obsessions, nurse Susan finds the body of the hospital’s “gossip queen” in the orthopedic storage room. She doesn’t realize this is the first of a series of murders involving her colleagues or that her life is in danger. She is a widow and is exploring a new romantic relationship that promises love but she fears the man she is falling for is as controlling as her dead husband. The arrival of courtship gifts, at first, seen as innocuous soon takes on a sinister note.

This book kept me on edge from the first page to the last. Several times I just ‘knew’ I’d figured out who the killer was, but each time, there was a bit of doubt there until the very last paragraph! I highly recommend this book. 4 Stars (Excellent!)”–Tracie’s Book Reviews by Kathy’s Faves and Raves