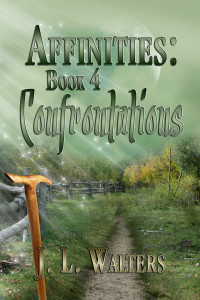 In Confrontations by J.L. Walters, a Books We Love Young Adult Fantasy, Ash, Bran, Ky and Jay along with their friends have now mastered their affinities. They now control their ability to use Earth, Air, Fire and Water. The time has come for them to face Dom Senet and He Who Walks with Evil. They have learned a disturbing fact. He Who Walks With Evil is able to exchange an old body for a new one. Dom Senet wishes to obtain the secret and he is willing to sacrifice even his own son to gain this power. The four sets of companions set off to rid the doms and domas of Dom Senet’s bonds and to defeat the two evil men. Can they or will they become pawns to evil?