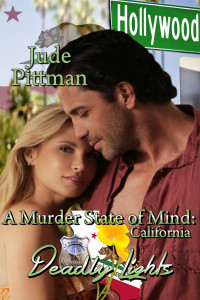 Kelly and Gillian never did get a chance to take the honeymoon they planned. What with murders at the Stables, and Kelly helping Detective Graham with some gnarly sheriff’s department work, so when Stella’s neice Marcy (who readers will remember from Deadly Betrayal) is nominated for recording artist of the year, and Kelly is offered an expense paid trip to tinseltown if he and Gillian will just look after the songstress while her husband is away on government business, the couple can’t very well say no.  This starts one of Kelly’s most intriguing mysteries, in book 1 of Kelly on the Road.  This new series starts with, A Murder State of Mind, California.  If you aren’t familiar with the gang from the Hideaway in Texas, then I highly recommend you check out the Murder State of Mind Trilogy, which is now on sale at a fantastic price and includes all three of the first series, Deadly Secrets, Deadly Betrayal and Deadly Consequences.