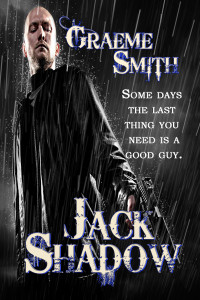 Jack Shadow. He’s heard them – every one of them. The jokes. They all start out the same. “See, this guy walks into a bar…” Well, that’s not him. That guy who walked into a bar.

He’s the guy who walked out.

It’s not amnesia. Near as anyone knows, he just doesn’t have a past. Near as anyone knows – or admits to. He doesn’t walk round a corner, and some guy from a car shoots at him because of something he did long ago. Sure. Guys shoot at him. Hell, women too. But not for long ago. Mostly for last week. Where ‘last week’ is any week you choose. No, he just walked out of a bar.

When Jack walked out of the bar, someone was waiting for him. The Dragon. Now he fixes things for them – any way, any time they want him to. Which is fine by Jack – he doesn’t ask questions. But now he’s got a blonde with a bad habit of not staying dead – and his employers want to kill him. Now Jack’s going to take all the time he needs to show them why that’s a really bad idea.

Jack Shadow. He’s not a nice man. He’s just the best there is at what he does, and that may be a very good thing. Because some days – the last thing you need is a good guy.

As airships go, it flew like a lump of lead. That might have had something to do with me shooting the Captain and both deck crew, and locking the hydrogen release valves wide open.

The ship had taken off with some big-ass ceremony. A guy with more money than sense had paid some guy with more sense than money to try to do what the Hindenberg had told people not to do. So the guy with no money had done some thinking, then some other guys did some making. Now the guy with no money had money and the guy with lots of money had an airship. Big-ass airship, big-ass launch ceremony. So with all the smoke and mirrors, it hadn’t been hard to get on board. The flight from London to New York meant the blimp had to go real high, to catch the jet stream. I figured there’d be time.

OK. So you’re thinking the big shot, right? Hell no. He had the smarts to think maybe being on the maiden voyage wasn’t such a hot idea. So he’d got on with all the cameras flashing and then sneaked off out the back. Left some dumb look-alike stand-in with the reporters to make happy faces and tell them funny stories. No. There was a band on board, to keep things poppin’. The Dragon wanted to make sure the bass player never made it to New York.

Why? Damned if I know. They don’t say, and I don’t ask. It’s a job, that’s all. Just another job. That’s the Dragon. Some say it’s all about the balance. Some say it’s the harmony. Some say Dragon’s just a bunch of mean sons of bitches out to rule the world. ‘Course, most of them as say that won’t say it any more.

Me? I say it’s just a big pot, and sometimes it needs stirring. Nobody needs to tell the spoon nothin’. I’m a spoon.

So I did what needed doing, and now the ship wasn’t going anywhere but down. Along the way, some people got brave. So they got dead. No big. At least it was quick for them. But the chute I had was only good at low altitude and the damn ship was dropping real slow. Time to kill. So there I was. Sliding down the sky jammin’ real bad Nobody’s Fault But Mine on a dead guy’s axe, till I could pop a window and open my chute.

Real bad? Hell. I never said I could play.

That’s what it’s like in the Dragon. Sure, they tell you you’re a hero. Saving the world. And if you believe it, what do you get? Well, you get to play bad lead guitar in a lead zeppelin.

So there it is. Let’s try that joke again. See, this guy walks out of a bar….

I can tell you’re wondering. Why we here, you and me? Why we talking? Why am I telling you all this? Well, see, every job needs that moment. The moment you bang the side of the pinball machine and rock the ball, without ringing tilt. A distraction. So. Consider yourself distracted. But don’t take it personal. It’s just a job. I’ll make it quick.