Sign UpLogin
You are here: Home / Books / Lines of Fire 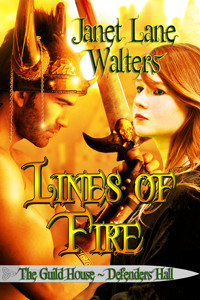 To honor a promise made to his dying father, Alric trains as a Defender. For some reason the Swordmaster wishes him gone and his first two bondings end in failure. A failed third one will see Alric banished. His meeting with the older daughter of the Swordmaster reveals a double heart bond, but she has been promised to Petan, the Swordmaster’s favorite. A duel is fought and though Alric can read Petan’s lines of fire, the other dueler cheats and nearly kills Alric. Petan is banished but he knows secret ways into Defenders Hall. Kalia, his now bondmate’s lines are tarnished. Not only do Alric and Kalia need to find Petan, they must learn how to cleanse her lines.