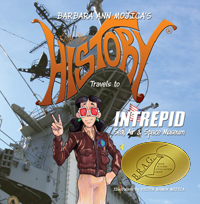 Where can you explore life on a submarine, an aircraft carrier, and Outer Space all in one place? At the INTREPID Sea, Air & Space Museum visitors can watch war movies, view actual WW II planes, and explore the Growler nuclear submarine. The USS Intrepid served in WW II, the Vietnam War, during the height of the Cold War, and as FBI headquarters for investigating the September 11, 2001 terrorist attacks. Read more about this one ship’s amazing history, and the sacrifices of those who served on her, to keep the USA safe and free.